“It’s great news for ozone in the Southern Hemisphere,” said Paul Newman, chief scientist for Earth Sciences at NASA’s Goddard Space Flight Center in Greenbelt, Maryland. “But it’s important to recognize that what we’re seeing this year is due to warmer stratospheric temperatures. It’s not a sign that atmospheric ozone is suddenly on a fast track to recovery.”

Ozone is a highly reactive molecule comprised of three oxygen atoms that occurs naturally in small amounts. Roughly seven to 25 miles above Earth’s surface, in a layer of the atmosphere called the stratosphere, the ozone layer is a sunscreen, shielding the planet from potentially harmful ultraviolet radiation that can cause skin cancer and cataracts, suppress immune systems and also damage plants.

The Antarctic ozone hole forms during the Southern Hemisphere’s late winter as the returning Sun’s rays start ozone-depleting reactions. These reactions involve chemically active forms of chlorine and bromine derived from man-made compounds. The chemistry that leads to their formation involves chemical reactions that occur on the surfaces of cloud particles that form in cold stratospheric layers, leading ultimately to runaway reactions that destroy ozone molecules. In warmer temperatures fewer polar stratospheric clouds form and they don’t persist as long, limiting the ozone-depletion process.

At the South Pole, NOAA staff launch weather balloons carrying ozone-measuring “sondes” which directly sample ozone levels vertically through the atmosphere. Most years, at least some levels of the stratosphere, the region of the upper atmosphere where the largest amounts of ozone are normally found, are found to be completely devoid of ozone.

“This year, ozonesonde measurements at the South Pole did not show any portions of the atmosphere where ozone was completely depleted,” said atmospheric scientist Bryan Johnson at NOAA’s Earth System Research Laboratory in Boulder, Colorado.

Uncommon but not unprecedented

This is the third time in the last 40 years that weather systems have caused warm temperatures that limit ozone depletion, said Susan Strahan, an atmospheric scientist with Universities Space Research Association, who works at NASA Goddard. Similar weather patterns in the Antarctic stratosphere in September 1988 and 2002 also produced atypically small ozone holes, she said.

“It’s a rare event that we’re still trying to understand,” said Strahan. “If the warming hadn’t happened, we’d likely be looking at a much more typical ozone hole.”

There is no identified connection between the occurrence of these unique patterns and changes in climate.

The weather systems that disrupted the 2019 ozone hole are typically modest in September, but this year they were unusually strong, dramatically warming the Antarctic’s stratosphere during the pivotal time for ozone destruction. At an altitude of about 12 miles (20 kilometers), temperatures during September were 29 degrees F (16˚C) warmer than average, the warmest in the 40-year historical record for September by a wide margin. In addition, these weather systems also weakened the Antarctic polar vortex, knocking it off its normal center over the South Pole and reducing the strong September jet stream around Antarctica from a mean speed of 161 miles per hour to a speed of 67 miles per hour. This slowing vortex rotation allowed air to sink in the lower stratosphere where ozone depletion occurs, where it had two impacts.

First, the sinking warmed the Antarctic lower stratosphere, minimizing the formation and persistence of the polar stratospheric clouds that are a main ingredient in the ozone-destroying process. Second, the strong weather systems brought ozone-rich air from higher latitudes elsewhere in the Southern Hemisphere to the area above the Antarctic ozone hole. These two effects led to much higher than normal ozone levels over Antarctica compared to ozone hole conditions usually present since the mid 1980s.

As of October 16, the ozone hole above Antarctica remained small but stable and is expected to gradually dissipate in the coming weeks. 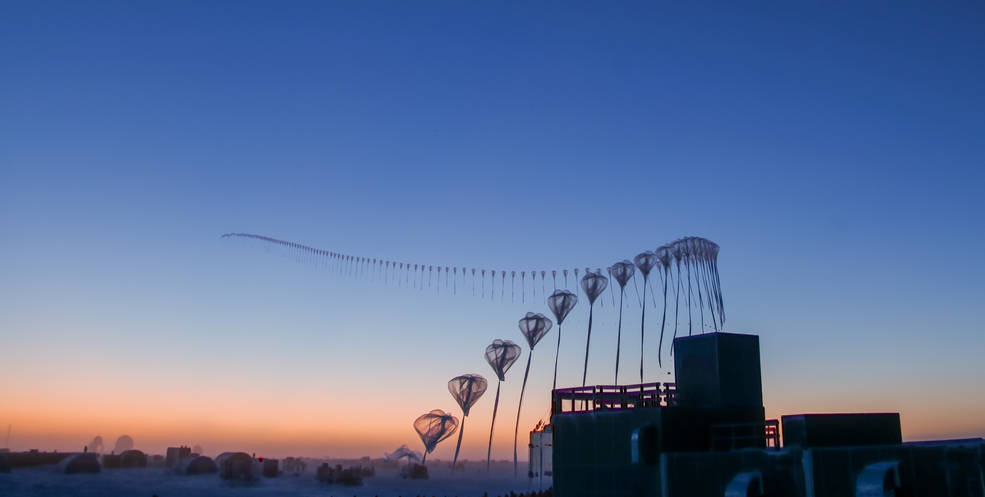 This time-lapse photo from Sept. 9, 2019, shows the flight path of an ozonesonde as it rises into the atmosphere over the South Pole from the Amundsen-Scott South Pole Station. Scientists release these balloon-borne sensors to measure the thickness of the protective ozone layer high up in the atmosphere.
Credits: Robert Schwarz/University of Minnesota

Thirty-two years ago, the international community signed the Montreal Protocol on Substances that Deplete the Ozone Layer. This agreement regulated the consumption and production of ozone-depleting compounds. Atmospheric levels of man-made ozone depleting substances increased up to the year 2000. Since then, they have slowly declined but remain high enough to produce significant ozone loss. The ozone hole over Antarctica is expected to gradually become less severe as chlorofluorocarbons— banned chlorine-containing synthetic compounds that were once frequently used as coolants—continue to decline. Scientists expect the Antarctic ozone to recover back to the 1980 level around 2070.