MORRISTOWN, NJ – As New Jersey families gather around the Thanksgiving table many will be having a similar conversation – their plans to leave New Jersey. According to a recent survey conducted for the Garden State Initiative (GSI) and Fairleigh Dickinson University’s School of Public & Global Affairs, 44% of New Jersey residents are planning to leave the state in the not so distant future with more than 1 in 4 (28%) planning to depart the Garden State within 5 years. Unsurprisingly, Property Taxes and the overall Cost of Living were cited as the main drivers. The results also debunk two issues frequently cited in anecdotal accounts of outmigration, weather and public transportation, as they ranked 8th and 10th respectively, out of 11 factors offered. 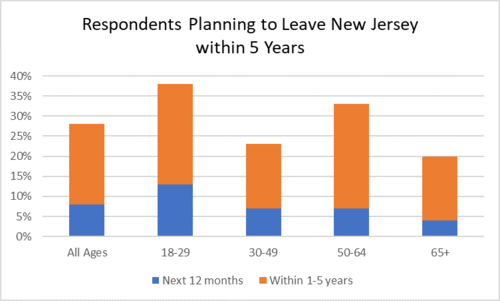 More broadly, and in spite of our geographic attractiveness, New Jerseyans’ inclination to escape our state doesn’t look much better.  39% of all New Jersey adults indicate they are considering moving out of the state within the next 10 years with an additional 5% indicating they are likely to move after 10 years.


“These results should alarm every elected official and policymaker in New Jersey,” said GSI’s president Regina M. Egea. “We have a crisis of confidence in the ability of our leaders to address property taxes and the cost of living whether at the start of their career, in prime earning years, or repositioning for retirement, New Jersey residents see greener pastures in other states.  This crisis presents a profound challenge to our state as we are faced with a generation of young residents looking elsewhere to build their careers, establish families and make investments like homeownership.” 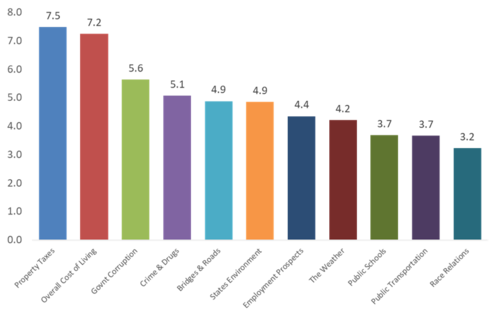 “What’s interesting is that new Jersey’s top two problems are really deeply rooted political problems,” said Peter Woolley, director of FDU’s School of Public & Global Affairs. “That means our big problems can only be resolved through a sustained and resolute political process.”

Respondents to the poll cited property taxes and the high cost of living are the two most concerning issues. When rating concerns on a basis of 0 to 10, these “bread and butter” issues garnered the highest response to a question that surveyed which quality of life indicators are of the greatest concern to New Jersey adults. Government corruption and concerns about crime and drugs rounded-out the top 4 concerns, although at a distance. Of note, the survey found no significant differences in responses across income levels.

Did you see it?
New Jersey now has a "wealth disparity" task force to stamp out financial inequality

About The Garden State Initiative

The Garden State Initiative is a 501(c)3 nonprofit organization dedicated to strengthening New Jersey by providing an alternative voice and commonsense policy solutions in the state — solutions that promote new investment, the growth of businesses, the creation of economic opportunities, and innovation to the benefit of all New Jerseyans. GardenStateInitiative.org

Personal, global and transformational, FDU has an international profile with four campuses in three time zones, two in the Garden State, one in Oxfordshire, England and one in Vancouver, Canada.  FDU’s School of Public and Global Affairs prepares students for advancement in public and non-profit leadership offering three elements of education and service: the Master of Public Administration (MPA) for those who want to lead governmental organizations, quasi-governmental agencies, and non-profits; the MA in Global Affairs, offered to diplomatic staff  from Argentina to Zambia; and the FDU Poll conducting since 2001 original research for corporate, non-profit, and government entities. 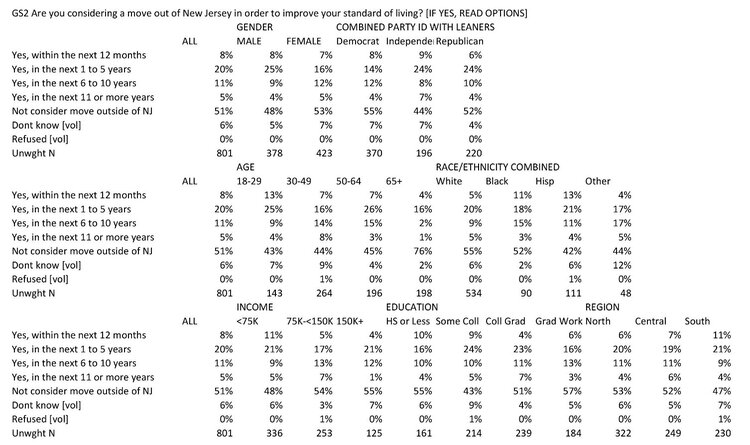 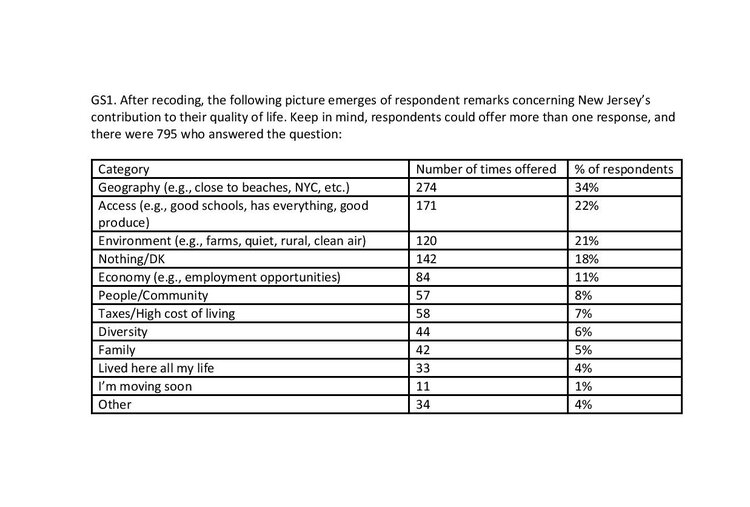 The survey was conducted by live callers on both landlines and cellular phones between September 26 through October 2, 2019, with a scientifically selected random sample of 801 New Jersey adults, 18 or older. Persons without a telephone could not be included in the random selection process. Respondents within a household are selected by asking randomly for the youngest adult currently available. The interview was conducted in English and included 253 adults reached on a landline phone and 548 adults reached on a cell phone, all acquired through random digit dialing.

The data were weighted to be representative of the non-institutionalized adult population of New Jersey. The weighting balanced sample demographics to target population parameters. The sample is balanced to match parameters for sex, age, education, race/ethnicity, region and phone use. The sex, age, education, race/ethnicity and region parameters were derived from 2017 American Community Survey PUMS data. The phone use parameter was derived from estimates provided by the National Health Interview Survey Early Release Program.[1][2][3]

Weighting was done in two stages. The first stage of weighting corrected for different probabilities of selection associated with the number of adults in each household and each respondent’s telephone usage patterns. This adjustment also accounts for the overlapping landline and cell sample frames and the relative sizes of each frame and each sample. This first stage weight was applied to the entire sample which included all adults.

Did you see it?
Phil Murphy blaming the sharp increase in Jersey inner-city violence on the weather was a knucklehead move

The second stage of the weighting balanced sample demographics to match target population benchmarks. This weighting was accomplished using SPSSINC RAKE, an SPSS extension module that simultaneously balances the distributions of all variables using the GENLOG procedure. Weights were trimmed to prevent individual interviews from having too much influence on the final results. The use of these weights in statistical analysis ensures that the demographic characteristics of the sample closely approximate the demographic characteristics of the target population.

Post-data collection statistical adjustments require analysis procedures that reflect departures from simple random sampling. We calculate the effects of these design features so that an appropriate adjustment can be incorporated into tests of statistical significance when using these data. The so-called “design effect” or deff represents the loss in statistical efficiency that results from a disproportionate sample design and systematic non-response. The total sample design effect for this study is 1.27.[4]

All surveys are subject to sampling error, which is the expected probable difference between interviewing everyone in a population versus a scientific sampling drawn from that population. Sampling error should be adjusted to recognize the effect of weighting the data to better match the population. In this poll, the simple sampling error for 801 New Jersey adults is +/-3.9 percentage points (including the design effect) at a 95 percent confidence interval. Thus, if 50 percent of New Jersey adults in this sample favor a particular position, we would be 95 percent sure that the true figure is between 46.1 and 53.9 percent (50 +/- 3.9) if all New Jersey adults had been interviewed, rather than just a sample.

Sampling error does not take into account other sources of variation inherent in public opinion studies, such as non-response, question wording, or context effects.

This telephone survey was fielded by Braun Research, Inc. with sample from Dynata.

The sample was purchased from Marketing Systems Group and the research was funded by Fairleigh Dickinson University and the Garden State Initiative.

Did you see it?
Pennacchio Calls for Learning, Healing on State’s First Juneteenth Holiday

GS1        In a few words, please tell me what it is about New Jersey that improves the quality of your life:

GS2      Are you considering a move out of New Jersey in order to improve your standard of living?

GS3        When you think of life in New Jersey, how much, if at all, does the following make you wish you lived somewhere else? Please use a scale of 0 to 10, with 0 meaning it would have no influence on your  desire to leave the state, and 10 meaning it is the most influential reason for wanting to leave the state. [Rotate GS1A through GS1L]

GS1C     The quality and availability of public transportation

GS1E      The state’s environment, such as the quality of its air and water

GS1G     The safety and condition of the state’s roads, bridges, and tunnels

[4] The composite design effect for a sample of size n, with each case having a weight,  is computed as

Man with Ties to Florida and New Jersey Arrested for Assault on Law Enforcement during Jan. 6 Capitol Breach