The Asian giant hornet, aka vespa mandarinia, aka, the murder hornet, American beekeepers fear are starting to colonize the Pacific Northwest.   Murder hornets get their name from their body count.  In Japan alone, 50 people each year die from murder hornet attacks.  Last fall two murder hornets were confirmed in Washington State and at least one beekeeper believes the destruction of his honey bees came at the hands of these two-inch long hornets.   They are the world’s largest hornets and are also nicknamed the yak-killer hornet.  A story in the New York Times today put the Asian giant hornet back on the radar in America.

Related News:  She drove around with his dead body in the trunk of her BMW for 10 days, but she didn't kill him

According to the Washington State Department of Agriculture, in December 2019, the agency received and verified four reports of Asian giant hornet near Blaine and Bellingham.

“These are the first-ever sighting in the United States. Canada had also discovered Asian giant hornet in two locations in British Columbia in the fall of 2019,” the department said. “While they do not generally attack people or pets, they can attack when threatened. Their stinger is longer than that of a honeybee and their venom is more toxic. They can also sting repeatedly.  If it becomes established, this hornet will have negative impacts on the environment, economy, and public health of Washington State.” 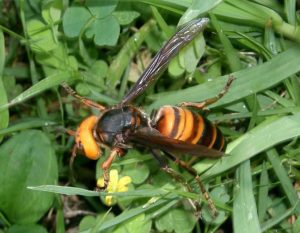 Asian giant hornet attacks and destroys honeybee hives. A few hornets can destroy a hive in a matter of hours. The hornets enter a “slaughter phase” where they kill bees by decapitating them. They then defend the hive as their own, taking the brood to feed their own young. They also attack other insects but are not known to destroy entire populations of those insects.

The USDA reported the Washington detection followed the eradication of a murder hornet nest in Nanaimo on Vancouver Island, British Columbia, Canada on September 18, 2019. These were the first detections of the Asian giant hornet in North America. Beekeepers have reported other observations dating back to October through public outreach campaigns by Washington State and British Columbia.

“Eradication of this species focuses on eliminating queens. Strategies to achieve this vary depending on the time of season. Queens can be directly trapped and killed in the early spring and late fall. During the summer, nests can be located and destroyed,” the USDA said. “Nests are formed in the ground and are challenging to locate. Methods for locating nests involve labor intensive strategies.”

Related News:  If you thought ANTIFA would go away under Biden, think again as group storms, destroys Portland Democrats office

If the idea of a bee colony killer lurking in the Pacific Northwest isn’t already a horrifying prospect for American beekeepers, it gets worse.  Typical protective clothing worn by beekeepers will not prevent murder hornet sting injuries, so beekeepers on the front lines of this battle will have to upgrade their protective suits to thicker material.  So far, the Asian giant hornets have only been confirmed at a few locations in Washington State and farmers and beekeepers are working aggressively to trap and kill the invasive species before any real damage could be done.