BERKELEY TOWNSHIP, NJ – Most people these days would be lucky enough to have one decent paying job, but two members of one Ocean County law firm have dozens of public jobs and how one elected official claims they got them is very disturbing.  Last week, Toms River Councilman Daniel Rodrick exposed New Jersey Assemblyman Gregory P. McGuckin for having 24 different public jobs for himself and a total of 45 public jobs for his firm, Dasti, Murphy, McGuckin, Ulaky, Koutouris and Connors.   Councilman Rodrick alleged that McGuckin is using his position as a New Jersey Assemblyman to extort public officials into funneling work to his law firm.   As part of our investigation into Rodrick’s claims, we found concrete evidence of the firm’s 45 jobs, but we also found that another partner in that firm, Senator Christopher Connors declared in his 2020 campaign law enforcement disclosure that he holds an astounding 17 public jobs.

The firm, headed by NJ GOP interim powerbroker Jerry Dasti, now earns over $2,000,000 annually in public contracts since Frank Holman, III has taken control of the Ocean County Republican Party.  Both the McGuckin/Dasti firm and Holman’s accounting firm are funneling millions of dollars in public contracts through their business.   Holman’s firm takes in well over $6,000,000 in public pay-to-play contracts annually.

Of course, political elites gobbling up public contracts is nothing new in Ocean County, but what is new, is Rodrick’s claim that the process being utilized by the McGuckin and Dasti firm is the extortion of local public officials.  Rodrick claimed that McGuckin met with a Toms River MUA commissioner and ordered that commission not to appoint a replacement chairman after the eventual retirement of current chairman Robert DiBiase.   Rodrick claimed McGuckin is bullying his way to two more jobs for the pay-to-play firm, including the MUA and Toms River Township town hall.

Last week we learned that both McGuckin and Connors, combined also took a $12,000 political campaign endorsement from former Burlington County Freeholder Kate Gibbs in exchange for endorsing Gibbs for U.S. Congress.  This week, we’re expanding this investigation to all members of the New Jersey Senate and Assembly to see how certain privileged individuals are using public funds and politics to personally enrich themselves.

As for Connors, in his 2020 New Jersey personal finance disclosure, here’s the 17 public jobs held by the state senator. 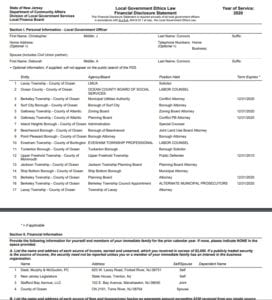