EDISON, NJ – Edison City Council President Joyce Ship-Freeman is under fire tonight after the Simon Wiesenthal Center called out two anti-Semitic postings on the council woman’s Facebook page.  “Whatever the circumstances of how they got on her page, why has it taken her one month to remove the incendiary tropes about Jews and Israel,” the center said.  The post referenced a “Saint Corona” who is the saint of plagues and infections, noting her “feast” begins on May 14th, then referencing the creation of Israel on May 14, 1948.

Is Corona the patron saint of plagues for the Catholic Church?

“It’s incredible but it’s seemingly true – there is a Saint Corona and she is one of the patrons of pandemics,” reported the website of the Roman Catholic Diocese of Lansing, Michigan.   The Catholic Church says there is a Saint Corona, but her history is marred and nothing suggests she was the Saint of Plagues.  St. Edmund and St. Roch are actually two saints that helped the church and its worshippers in times of plagues.

As far as the other post, it was a reference that black people don’t eat Chinese food anymore because the Wuhan Chinese Virus, COVID-19, originated in China.

Freeman said she must have been hacked, claiming it was a political stunt to discredit her by her opponents.

“My grandmother escaped the lynchings in the south by moving to Edison,” she said. “This is not a game. Someone should take them to the Lynching Museum in Tennessee to at least let them gain some knowledge of race in America.” 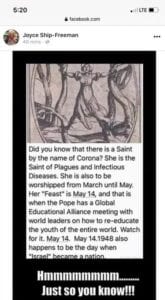