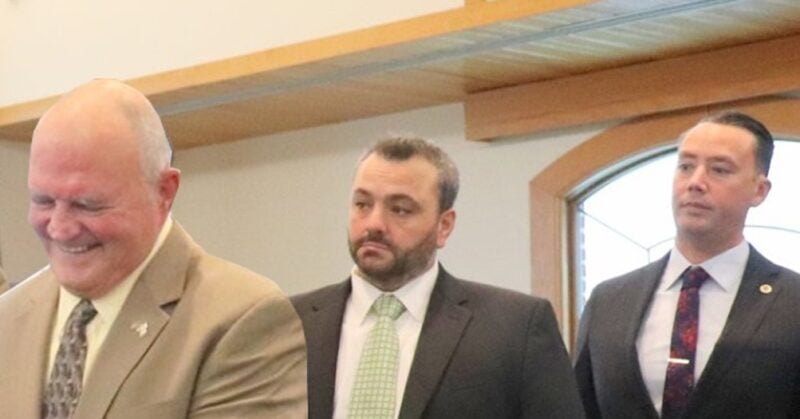 TOMS RIVER, NJ – Pay to play politics in New Jersey, Ocean County and even in Toms River is nothing new, but in 2019 when a political regime shift occurred within the Republican Party that controls all of the money in the county happened, many felt things were going to change.  The fact is, things did change, but for the worse.  In hindsight, the new rulers of the dominion are now pay-to-play firms that donate tens of thousands of dollars per year to political candidates across the state, in return for millions of dollars in lucrative public contracts.

One man in Ocean County is on a mission to fight the political corruption sweeping across Ocean County like never before, Councilman Daniel Rodrick of Toms River.

“Pay-to-Play politics is destroying the state of New Jersey and I cannot sit idly by and watch as it destroys Toms River, which is why I have filed a complaint in Superior Court against Mayor Hill, the Toms River Governing Body, Assemblyman Gregory P. McGuckin and his law firm,” Rodrick said.  “Gregory P. McGuckin is a State Assemblyman that holds 30 Municipal Job appointments, serving as an attorney for townships in various capacities. Mr. McGuckin knows the law and his recent appointment in Toms River is a violation of the law.”

Going into 2020, McGuckin’s law firm brought in about $1.2 million annually in public pay to play contracts.  Now, McGuckin has been empowered by Ocean County GOP Chairman Frank Holman, whose firm takes in over $6,000,000 annually statewide in pay-to-play contracts and Freeholder Virginia Haines, the matriarch of the Ocean County Republican Organization.

Now, McGuckin’s firm has increased their public take by an estimated $2,000,000 annually in a financial takeover of the county that started this past January.  During the height of the pandemic, when nobody was watching, McGuckin’s firm in cahoots with the Toms River Township Council and Mayor Maurice Hill squeezed themselves into an estimated $500,000 annual job as the director of law for the township.

It was a new position created by McGuckin, for McGuckin, aided by Mo Hill and the entire Toms River council, save Rodrick.

Now, Rodrick has filed charges against Hill, the council and McGuckin for illegally hiring McGuckin, who holds, according to Rodrick, 30 other municipal job appointments.

The Toms River Republican Party has become a complex money-laundering operation where powerful professional business owners such as McGuckin donate thousands of dollars of campaign money into willing political campaign candidates that will, in return, reward McGuckin’s firm with public contracts.   In essence, the way the machine works is McGuckin raises money from donors, not even his own money, takes that money, gives it to political candidates and upon their victory, those candidates hire McGuckin’s firm for contracts that can range anywhere from $50,000 per year to $500,000 per year, such as the one he was rewarded within Toms River.

In most cases, the participants were willing and easy to succumb to the power trio of McGuckin, Holman, and Haines.

Some went down with a fight and others, who flat out refused are now feeling both political and financial retribution against their towns for opposing the political mafia that has sprouted in the power vacuum left by an absentee GOP Chairman, Frank Holman.

To add insult to injury as the McGuckin firm was gobbling new public contracts which paid out throughout the COVID-19 pandemic, Politico reported the firm received between $150,00 and $300,000 through the federal payment protection program, which was intended for small businesses who were shut down as a result of the pandemic.

Throughout the pandemic, McGuckin was present and on the clock for all of the municipal, county, and state meetings and continued to receive his $40,000 salary as a New Jersey State Assemblyman.  McGuckin also serves as the lead attorney for Jackson Township and is handling multiple federal lawsuits for the township including a federal lawsuit pitting McGuckin and the township against U.S. Attorney William Barr.

In 2019, Jackson Mayor Mike Reina had indicated he wanted to appoint Jackson lawyer Sean Gertner to the post of township counsel, but after a December caucus that involved Reina, McGuckin, Holman and members of the Jackson Republican Club, Reina left the meeting with a new outlook on life and instead leaned towards McGuckin. In return for that appointment, Reina was named to the exclusive 9 member Ocean County GOP screening committee.

Reina also is at the end of his contract with the Ocean County Bridge Department, that contract expires in 2020, but will now likely be reappointed to that position in exchange for the appointment of McGuckin to lead counsel.  McGuckin’s firm also serves as the lead legal counsel for the Lakewood Township Zoning Board.