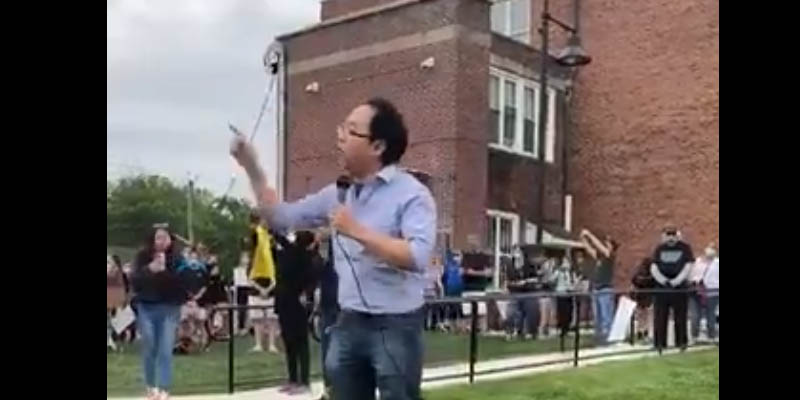 MOORESTOWN, NJ – Congressman Andy Kim reached back into his personal history of leftist activism at a rally in Moorestown, telling his loyal supporters that they need to continue their fight.  He told supporters that opponents on the right are hoping they will outlast the revolution and uprising sweeping America by the left, but said that’s not going to happen.

“Each and every one of us has to ask today and every day, what are we willing to do? What are you willing to do to fight…” Kim asked his supporters.  “We will continue to fight because we know that it is not a quest we can ultimately end.  We believe we are better than this.”

Kim, who just months before running for Congress to represent Ocean and Burlington Counties was spearheading a radical left-wing resistance group aimed at removing President Donald J. Trump and causing a national uprising.

Today, Kim announced he will join the Pelosi Democrat camp and vote to impeach President Donald J. Trump, essentially sealing his fate as a one-term Congressman in a majority red district.

“It is with a sense of humility, and with the future of our Constitution and presidency in mind, that I will vote yes on the articles of impeachment before the House,” Kim said of President Trump’s impeachment.

Congressman Andy Kim made it clear his priority is joining the radical left in their crusade to remove Trump at all costs, rather than any issue he campaigned on,” said the Congressional Leadership Fund.

Related News:  Even the left has no idea what Joe Biden is talking about half the time
Top comments about this post on Facebook.