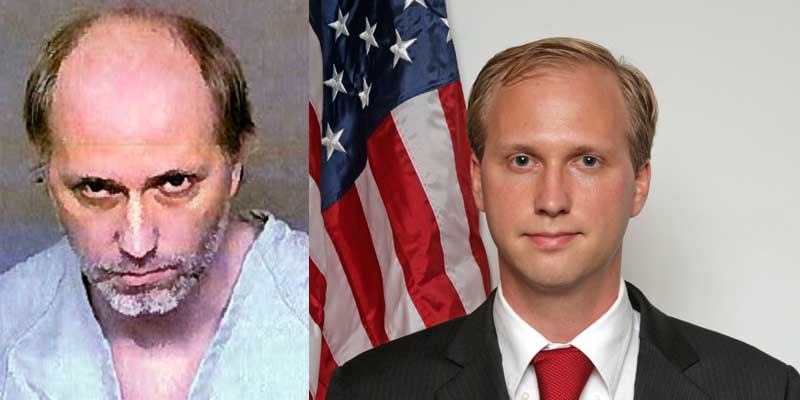 FRESNO, CA – Nathan Daniel Larson of Catlett, Virginia ran for office in 2017  as an independent, seeking to become a member of the Virginia House of Delegates representing District 31. He went on to lose the race.  His first venture into the public spotlight came in 2008.

In December 2008, while living in Boulder, Colorado, Larson sent a detailed email to the U.S. Secret Service threatening to kill the President of the United States. At the time, George Bush was the outgoing president and Barack Obama was the incoming president. Larson pleaded guilty in federal court. In October 2009, he was sentenced to 16 months in federal prison and wound up serving 14 months.

Today, he was arrested and sitting in a jail cell in Denver.

Denver law enforcement officials have arrested Larson and now he is lodged at the Denver County Jail facing a misdemeanor charge of harboring a minor.  He is also facing felony charges in Fresno County for kidnapping, child abduction, soliciting child pornography from a minor, and meeting a child for the intention of sex.


Larson is scheduled to have a court hearing in Denver on December 24th. During this time, an extradition request will be made to transport Larson to the Fresno County Jail.

On the morning of Monday, December 14th, the Fresno County Sheriff’s Office and Fresno Police Department received a report of a missing 12-year-old Fresno girl. During the early portion of the investigation, detectives developed information that the girl may have been coerced into running away with an older man. A man she had met through social media in mid-October.

The information pointed to the girl possibly heading to Fresno Yosemite International Airport to catch a cross-country flight to Virginia to be with this man. Due to the nature of the circumstance of this case, detectives with the Central California Internet Crimes Against Children (ICAC) Task Force took over the investigation. Detectives received assistance from members of Fresno Airport Police and Homeland Security Investigations who revealed a man, later identified to be Nathan Larson, was seen with a young girl and the two boarded a plane bound for Washington DC.

This flight was scheduled to have a layover in Denver, so detectives contacted law enforcement authorities there and asked that they check the airport for Larson and the child. A Denver Police officer assigned to the local FBI Task Force located Larson and arrested him. Agents rescued the girl, who was uninjured and made arrangements to have her reunited with her family in Fresno, which she was later on Monday night.

Once in custody, detectives learned more about how the abduction took place. Larson flew to Fresno from Virginia and then traveled to the girl’s home. He persuaded her to sneak out of her house around 2:00 am. He used a rideshare company to pick her up and together they rode to the Fresno Airport. Larson made her wear a long hair wig to alter her appearance. He also told her to act as though she was disabled and unable to speak to ensure she would not converse with anyone at the airport while making their way onto the airplane.

On December 17th, Fauquier County (VA) Sheriff’s detectives, agents with Homeland Security Investigations and the Northern Virginia / District of Columbia Internet Crimes Against Children Task Force seized electronic devices while executing a search warrant at Larson’s home located on the 9200 block of Prospect Ave. in Catlett, VA. While at the house, Larson’s father, 69 year old Arthur Larson, assaulted a HSI agent. He was arrested for assault and battery and later released from jail after posting bond. During the investigation, detectives uncovered Nathan Larson has a deeply disturbing background. He is a white supremacist and a well-known advocate for pedophilia. This is a man who runs a website, which encourages the raping of children and sharing of naked photos and video of children being raped. During the past two months, Larson was able to convince the Fresno girl, through manipulation and grooming, to send him pornographic images of herself.

Due to the sophisticated nature of how Larson groomed this Fresno girl, detectives believe he has victimized other children in the past, but those cases have never been reported to law enforcement.

“[we] would like to remind the public to be vigilant when it comes to visiting websites and social media outlets,” the Fresno Police Department said in a statement. “Parents should also monitor their children’s internet usage and be aware of the software apps they are using. Parents should keep the dialogue open with their children in order to build trust. Online predators often pretend to be someone else in order to lure their victims in and take advantage of them. Teach children to be wary of the person on the other end of the chat line; many times people are not who they say they are.”

Report any suspicious behavior right away to law enforcement or file a cyber tip through the National Center for Missing & Exploited Children. https://report.cybertip.org/ You may also contact HSI at (866) 347-2423.

ICAC is comprised of 64 federal, state and local law enforcement agencies spread throughout nine counties in the Central Valley. It is dedicated to protecting children online and investigating crimes committed against children, which are facilitated by the Internet and computer usage.