District Attorney Gonzalez said, “These indictments reflect our commitment to stem the surge in gun violence that we have experienced since last spring. Many of these defendants are accused of recklessly opening fire in broad daylight, endangering not only their rivals but innocent passersby, including children. I commend the NYPD and my prosecutors for all of the hard work that went into building these cases and am determined to continue working on similar investigations to take more shooters off our streets.”

NYPD Chief of Detectives Rodney Harrison said, “There is no place in our city for the kind of violence alleged in this case, which tears at the fabric of life for all. I commend our NYPD investigators, and the prosecutors in the Brooklyn District Attorney’s Office, for working relentlessly to ensure these alleged gang members would be brought to justice.”

Three of the defendants in the 11-count indictment were arraigned in Brooklyn Supreme Court. They are variously charged with second- and fourth-degree conspiracy, second-degree attempted murder, first-degree attempted assault, and second-degree criminal possession of a weapon. They face up to 25 years in prison if convicted of the top conspiracy charge.

The District Attorney said that, according to the 77-count indictment, the defendants are allegedly members of a violent street gang known as 900 Gang. 900 is an umbrella organization comprised of affiliated violent street gangs operating in Brooklyn. Stack Money Goons (SMG) and Jayson Fam (JSF) are two such gangs that affiliate themselves under the umbrella of 900. SMG and JSF control territory within the confines of the 79th precinct bordering the 90th Precinct.

It is alleged that between April 19, 2019 and November 20, 2020, 900 members engaged in violence to establish geographic dominance. SMG and JSF controlled certain geographic areas in Brooklyn, which included the Sumner Houses, Tompkins Houses and 303 Vernon Avenue developments of the New York City Housing Authority, located within the Bedford-Stuyvesant section of Brooklyn within the confines of the 79th and 81st Precincts. To achieve those goals, some 900 members participated in violent criminal acts, including murder and shootings. It is alleged that SMG and JSF’s primary rivals are members of the Hoolies gang, who operated out of a building complex located across the street from SMG and JSF territory. The Hoolies territory included 721 Willoughby Avenue and 300 Vernon Avenue, as well as the Roosevelt Houses NYCHA development. 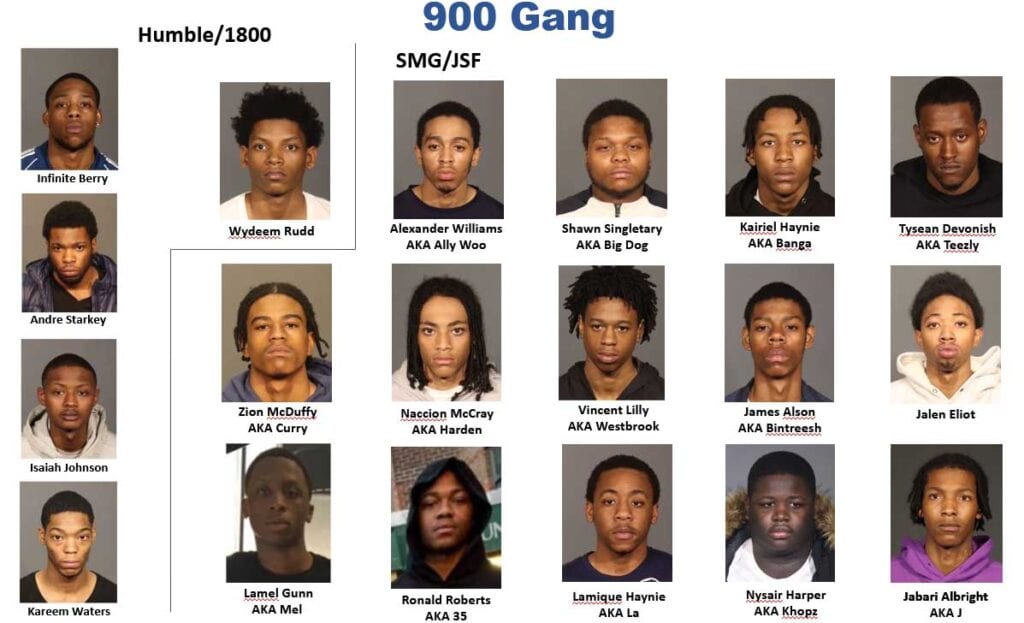 It is alleged that 900 members committed two murders, as well as numerous shootings, during the course of the investigation:

On June 29, 2020, at approximately 1:13 p.m., Tysean Devonish allegedly posed as a young woman on Instagram and responded to a post allegedly made by Tracey Washington, an alleged Hoolie member, seeking individuals to open credit card accounts in connection with a credit card fraud scheme that he allegedly operated. They agreed to meet at 1620 Dean Street in Weeksville Gardens. At approximately 5:45 p.m., defendants Kaireil Haynie, Alexander Williams and Tysean Devonshire drove to the area and Washington took a livery car to the location. Haynie and Williams allegedly got out of the car they were in and walked toward the livery car. Haynie allegedly fired multiple times into the livery cab, striking Washington, who exited the cab and fled down Dean Street, where he collapsed. He was taken to Kings County Hospital where he was pronounced dead.

On September 28, 2020, at approximately 3:39 p.m., Alexander Williams requested a cab from Rainbow Car Service, picked up Wydeem Rudd, and traveled to Clifton and Franklin Avenues, where they exited the vehicle. The defendants, allegedly wearing hoods and masks, walked through the Lafayette Gardens housing project, entered the rear of 456 DeKalb Avenue, and allegedly ambushed and shot Tylee Felder, who was standing in front of the building. Rudd and Williams allegedly shot Felder six times, including once in the head, killing him. After shooting Felder, Rudd allegedly fired into a crowd outside the building. Two bystanders were shot and wounded.

On October 2, 2019, at approximately 1:25 p.m., Naccion McCray and Vincent Lilly allegedly walked from 303 Vernon Avenue (SMG territory) to a bodega located at 335 Vernon Avenue (Hoolie territory). As the SMG members were entering, they noticed an alleged Hoolie member was exiting. McCray allegedly took a few steps back, pulled out a pistol and fired multiple shots, striking the victim in the leg. One .40 caliber shell casing was recovered.

On October 3, 2019, at approximately 2:55 p.m., James Alston, Shawn Singletary and Jalen Elliot were walking on Graham Avenue towards Cook Street. Alston allegedly saw three rivals walking across the street in the opposite direction, drew a pistol and fired twice. There were dozens of bystanders in the area at the time, including a family with small children. One of the shots went through a store window, narrowly missing the head of an employee. Fortunately, no one was struck or injured. A .40 caliber shell casing was recovered that was a match to the casing recovered at the alleged McCray shooting scene a day earlier.

On October 31, 2020, at approximately 10:30 p.m., Jalen Elliot and two other individuals left 303 Vernon Avenue and walked to Marcus Garvey Boulevard. Elliot continued to walk southbound on Marcus Garvey, then allegedly withdrew a gun and fired at a group of individuals standing in front of 721 Willoughby Avenue. A 14-year-old girl was struck in the leg.

On May 16, 2019, at approximately 8:15 p.m., Nysair Harper rode a CitiBike from the Tompkins Houses (SMG territory) to Hart Street, opposite the Pulaski Playground, where the Hoolies had just broadcast over social media. Harper was allegedly trailed by a black sedan as he rode the bike. He allegedly fired multiple shots into the playground, then fled on the bike to where the sedan was parked nearby and got into the car. A 15-year-old victim was shot in the thumb and treated at a hospital.

During the course of the conspiracy, it is alleged, incarcerated 900 members communicated with non-incarcerated members in jail phone calls to keep up to date on the status of members or to discuss violent acts. The defendants also allegedly used social media platforms including Facebook and Instagram to demonstrate their gang membership and to broadcast gang activity. They allegedly also posted music videos to YouTube containing song lyrics referencing the status of rivalries and referring to acts of violence committed by gang members.

Finally, it is alleged, in the 11-count indictment that the defendants are members of 1800/Humble gang, which is also under the umbrella of 900 gang, and that they feud with rival gangs such as OTB (Only the Borough) to maintain geographic dominance in Bedford-Stuyvesant and Crown Heights. It is alleged that on December 25, 2019 Andre Starkey and Kareem Waters and others walked to the Kingsborough Houses in Crown Heights where they happened to cross paths with a rival. Waters and Starkey each allegedly pulled out a gun and fired at the person, who fled the area. No one was injured.

An indictment is merely an accusation and not proof of a defendant’s guilt.