ROBBINSVILLE, NJ  –  Like him or hate him, Barstool Sports CEO Dave Portnoy is a pizza kingmaker.  One bite, or five or six, can make or break a pizzeria’s future in his business.  Followed nearly one-half million subscribers on YouTube alone, Portnoy’s reviews represent the defining moment of a pizzeria in America. He has essentially become the Michelin Star of the pizzeria industry.

A high score by Portnoy will mean instant lines out the door the next day. A low score used to mean bankruptcy and doom, although during the pandemic, he has limited his bad reviews, but it wasn’t always that way.  Just ask Jack’s Frozen Pizza and Goodfella’s who kicked him out for filming his review.  Jack’s pizza’s freeze-dried on store shelves throughout the pandemic while Portnoy helped most other frozen pizza makers move truckloads of inventory nationwide.   Goodfellas became Pizza non Grata in the pizza game.

A little over a year ago, Dave visited Papa’s Tomato Pies in Robbinsville and technically gave a fresh pie out of the oven an 8.9, so we wanted to know.  Does an 8.9 really exist and was Dave’s reviews spot on? 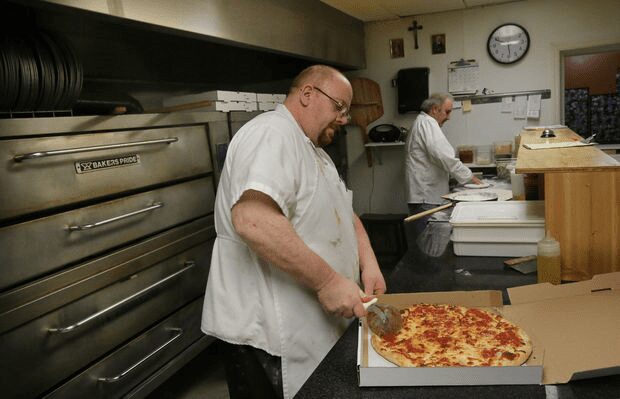 First, let’s put it out there that Dave and I don’t share the same idea of what a perfect pizza is.  My ideal pizza is a traditional New York-style football pizza.  The pizza has to have some volume, whereas Dave likes that crispy crunchy wafer-thin pizza.    What we found at Papa’s is an incredible compromise of both.  It has the Portnoy crunch but doesn’t sacrifice in volume and thickness. If you’re like me and your spouse loves the Portnoy crunchy pizza and you like the basic New York/New Jersey pie, you’ll both be happy at Papa’s.

As far as the 8.9, I have to confess. Dave called this one correctly. We tried the plain, sausage and mustard pie.  Yes, we did say mustard pie.  Papa’s Tomato Pies does the Trenton style sauce on top of the cheese and is a great split in the sauce to cheese ratio.  The pies come out with a nice crisp, nice over char, but not overdone. The mustard pie puts a nice slathering of mustard under the cheese layer and it’s actually their tastiest pie on the menu.

Now some things not covered in the One Bite Pizza review.  The service and wait staff at Papa’s is top-notch.  They make you feel like you’re part of the family.  Is Papa’s worth the drive? Yes, we’ve done it twice since our first visit.