WASHINGTON, DC – Back when Joe Biden was candidate Joe Biden, he needed to appeal to his supporters in ANTIFA and the far left who criticized President Trump’s foreign travel ban.  Biden called Trump’s travel ban xenophobic and even went as far as saying border walls and travel bans won’t stop the coronavirus.  That was back when Democrats paraded around Chinatown, maskless, saying there’s nothing to fear but fear itself when it comes to the COVID-19 pandemic.

Now, as the sitting president, Biden has taken Trump’s travel ban and raised it. 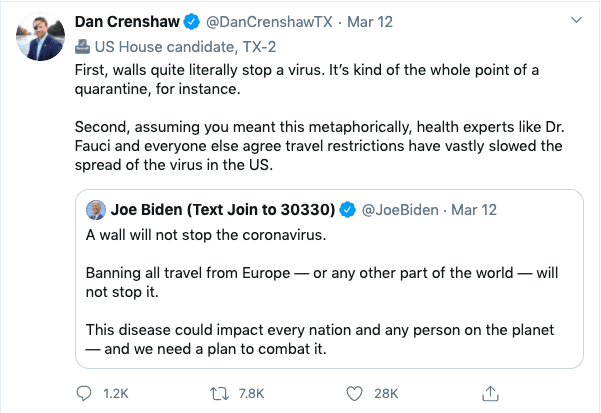 Back in March, Biden said, “A wall will not stop the coronavirus. Banning all travel from Europe – or any part of the world – will not stop it.”

Now, Biden is hoping to stop the spread of the coronavirus with his new travel ban.

At the time, U.S. Congressman Dan Crenshaw fired back at Bide.

“First, walls quite literally stop a virus,” Crenshaw said. “It’s kind of the whole point of a quarantine.”

Dr. Anthony Fauci in March, confirmed that travel restrictions would slow the spread of the COVID-19 virus.