Seymour, IN – On Monday afternoon, a Crawfordsville, Indiana man led troopers on a nearly 30-mile pursuit through two counties that ended with a crash near Scottsburg, Indiana.  With the assistance of multiple agencies, the suspect was then taken into custody on numerous charges.

The incident began at approximately 1:00 pm, when Trooper Andrew Garrett, Indiana State Police-Versailles, conducted a traffic stop on a red 2012 Honda Civic on I-65 Southbound near the 56-mile marker in northern Jackson County.  After briefly speaking to Trp. Garrett, the vehicle which was driven by Mitchell W. Jones, age 30, Crawfordsville, Indiana fled the scene southbound on I-65.  Numerous troopers from the Indiana State Police-Versailles Post assisted in pursuing the vehicle. 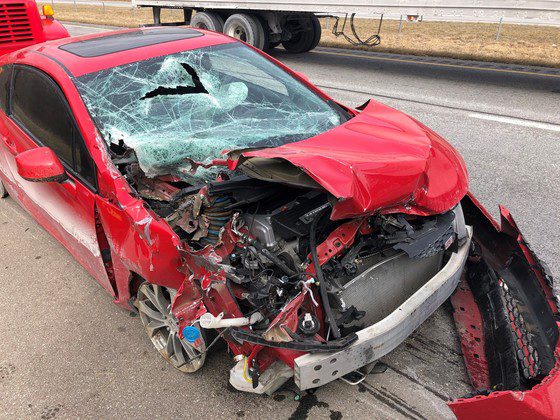 While approaching the Scottsburg exit, the vehicle struck the rear of a semi pulling a trailer, driven by James Green, age 45, Laconia, Indiana that was traveling southbound on I-65.  Jones and Green were both uninjured in the crash.  Jones resisted arrest at the scene before being taken into custody.  Jones spit on numerous officers and EMS personnel at the scene after being taken into custody.  Jones was transported to Schneck Medical Center in Seymour, Indiana for evaluation before being transferred to the Jackson County Jail where he faces numerous charges.

Your Amazon shipment is running late: Amazon truck involved in crash on I-74