DAYTONA BEACH, FL – When police officers in Daytona Beach started their shift last Wednesday, they probably didn’t figure they would be entering a hotel room with their guns drawn and facing off against a naked black male holding a rather ordinary lamp in one hand and knife in the other.  The incident occurred at the Beachside Hotel on Atlantic Avenue where rooms can be had for as low as $77 per night. Those rooms come complete with lamps, coffee makers, garbage cans, hangers and other random items that might come in handy if a squad full of police officers interrupt you while you’re sitting naked in a chair. Feel free to move the microwave wherever you want, the sign that says “policy” on the back of the door reads.

About half a dozen Daytona Beach Police officers showed up at the hotel room on a report of an armed man threatening to hurt himself and others.  At first, officers deployed tasers but missed.  As they entered the room, one officer yelled, “switch to lethal” as the naked man sitting in the chair by the window threw random hotel room objects at police officers.

Officers realized he was holding a knife and yelled, “Drop the knife!” 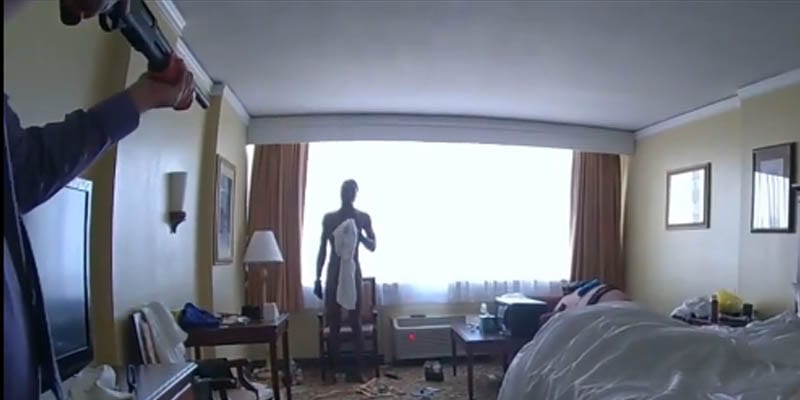 And the officers did, the man began taking taser shot after taser shot without flinching. Then officers deployed OC spray which also didn’t register with the naked man on a chair who then threw an ordinary table lamp at responding officers.   Police hit the man with two shots from what appeared to be a beanbag round, one hitting him squarely in the family jewels which caused the initial cracking of the otherwise rock-solid defensive stature of the suspect. Finally, police landed a taser shot sending the man screaming to the ground in pain, dropping his knife.

“On Wednesday (February 10, 2021), our officers were called to a beachside hotel after receiving word of an armed person who may be a threat to himself and others,” the Daytona Police Department said. ”
Our officers found a man inside a room who asked us several times to shoot him and threw objects at us, including knives.  This body camera video shows what happened. We successfully de-escalated the incident. No one was seriously injured. This man is now facing numerous charges.”

Police did not release the name of the suspect and the Daytona Beach Police Department Facebook page has the whole video to view if you wish to check it out.