The internet is now full of videos showing what it’s like in Marine Corps boot camp at Parris Island and San Diego, but just by watching videos, you can’t really get the real sense of what to expect.  There is no way to prepare yourself for that early morning when a drill instructor climbs aboard the bus, welcomes you to Marine Corps Recruit Depot then tells you to get off the bus.  Your life will forever change at that moment and everything you have ever been taught in life, well, you’ll soon find out it was wrong.

Drill instructors are menacing disciplinarians, but they are also the best of the best in the Marine Corps and their sole mission in life is to leave the Marine Corps in a better place than where they found it. 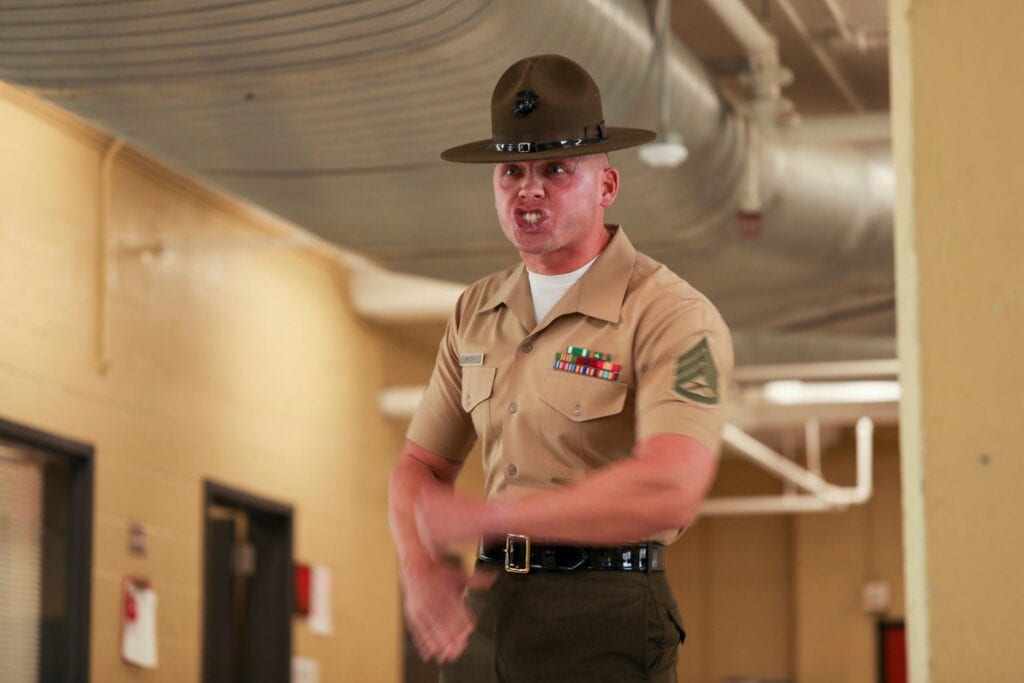 Get all the civilian bad habits out of your system here and make sure that in a few days, when you meet your drill instructors, you know the dos and don’ts. On my first night in receiving I dropped the contents of my entire seabag all over the deck on the march from receiving to the receiving barracks. I had literally every drill instructor in what felt like a 5-mile radius kicking my belongings all over the street.  It seemed like an eternity. I was that recruit who said “Hey drill instructors, check me out, I’m a screw up!”  To this day, I can remember nearly every second of that march. Get it out early. 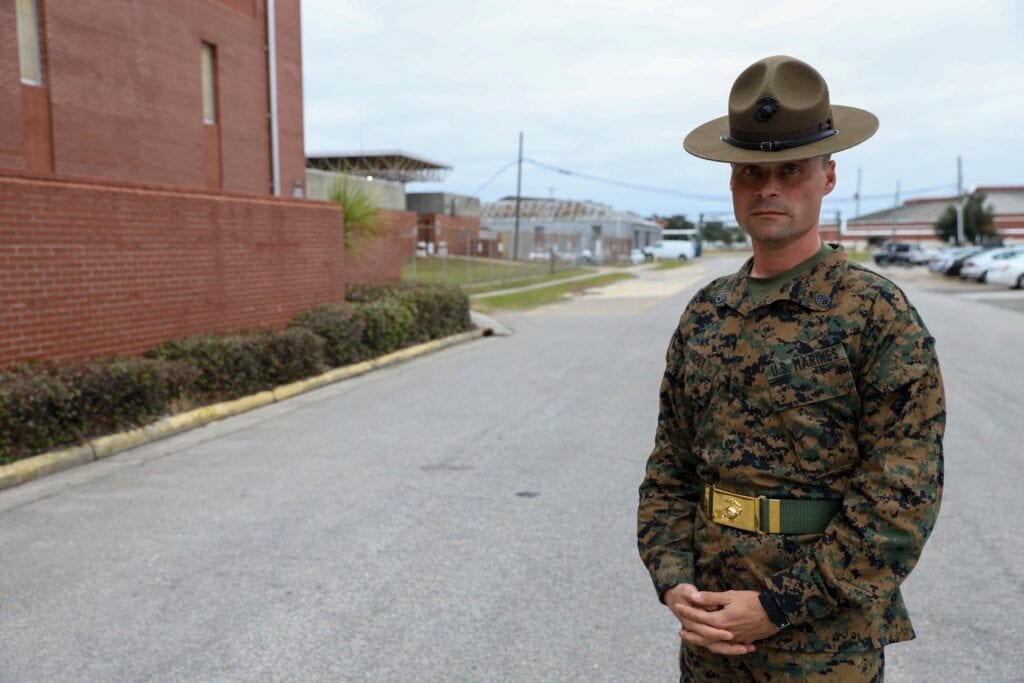 One of drill instructor’s pet peeves is making direct eye contact with them unless you’re talking to them in a one-on-one situation and they tell you to look at them. In that case, definitely make eye contact.  When all of the other recruits are standing online staring straight ahead, a slight turn of the head or slide left and right of the eyeballs can be seen by drill instructors like an owl can spot a worm on a tree a half mile away.  Don’t do it, because early on, drill instructors are seeing who needs extra work and discipline. You don’t want to make that list, because it’s often hard to get off it.

You might be asked why you’re ‘eye f*cking’ the drill instructor or if they owe you money, but at the end of the day, making eye contact is a great way to make yourself a good friend with your drill instructors, but not in a good way.

#8 There is no such thing as an emergency head call There will be times in boot camp when you might have to use the bathroom, but it might not be a good time to ask.  It’s natural that nature calls and in extreme cases, where you just can’t wait anymore, don’t ever exaggerate your request to use the head to a drill instructor.  The correct phrase is, “Sir, recruit <name> requests permission to make a head call.”   Don’t embellish it,  don’t sensationalize it by calling it an “Emergency head call” or “Recruit really, really needs to make a head call.”

Drill instructors don’t want to see you piss yourself, but they also want to see how much discipline you have to put that out of your mind.  Also, while we’re here, don’t piss your pants.

From that day on every time the platoon made a head call, the recruit had to run up and down the squad bay making siren noises and notify the platoon that it was all safe and secure for the platoon to make a head call. It was humiliation at its best, but you can be sure that nobody in our platoon ever sensationalized their urge to pee ever again.

On the other hand, a recruit who was too afraid to ask to use the head ended up peeing his pants and for the next week, he was recruit pisspants.  No matter where we were, the drill instructor would call out the recruit and show him off to drill instructors in other platoons and tell the story.

Never mistake a drill instructor’s corrections, words, attitude or anger towards you as anything more than you failing to do your job and them wanting to help you see the error of your ways.  Even the best recruits in the platoons will find themselves often in the crosshairs of the drill instructors as a quality control check.  I don’t want to say it’s all scripted, but in some ways, it’s all scripted.  Being a drill instructor is a science.  The same games and tricks that worked in 1961 worked in 1991 and will work again in 2021 with minor refinements.

Never think the DI’s hate you unless you’re a complete and total fuckup who is beyond repair and will never make a good fleet Marine.  In that rare case…yes, they probably hate you.  No, seriously, they don’t. 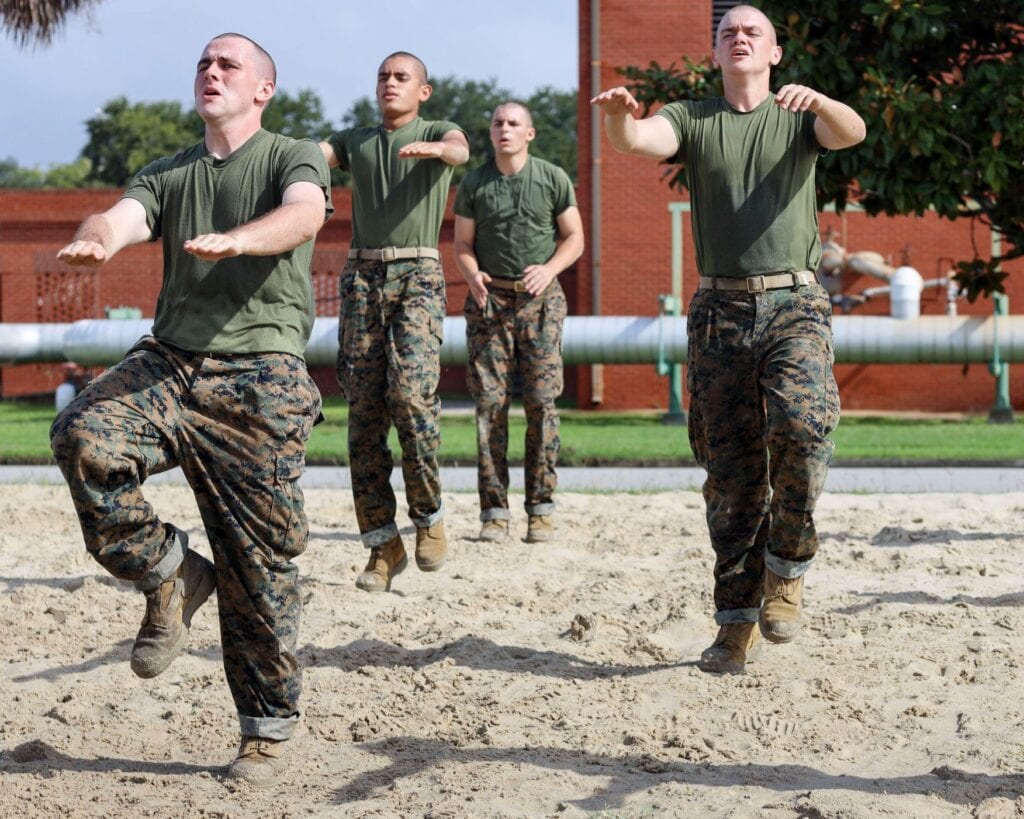 Forget everything I said in #7. Yes, Drill Instructors love their job.  They love the games. They love the strategies and tricks they employ to break down a civilian and turn him into a proper U.S. Marine.  Drill instructors often laugh and joke outside of the purview of their recruits on the many ways they dug you, PT’d you and stressed you out in a day.  They share your worst moments with each other.  They love it because they want to make you hard.  You may have heard of the term pain is weakness leaving the body, well, no truer words exist in Marine Corps Boot Camp. Pain IS weakness leaving the body and the more pain you endure, the stronger you’ll be.

Drill instructors are energized by the sweat you leave on the deck during quarterdecking.  They are charged by the amount of pain you endure, but they are more charged by the amount of pain you overcome and defeat. At the end of boot camp, my heavy drill instructor confided in me.
“I don’t like 3rd phase because all you recruits are stronger and in better shape, than I am and nothing I can do even moves the needle anymore to you recruits,” he said. “I need to get this platoon the hell off my island and get me some weak civilian lumps of clay to mold into well-trained Marines.”

He then said to me, “If you think this little moment we had changes anything, by God, I will find a way to get one more ounce of pain and sweat out of you before graduation day.” 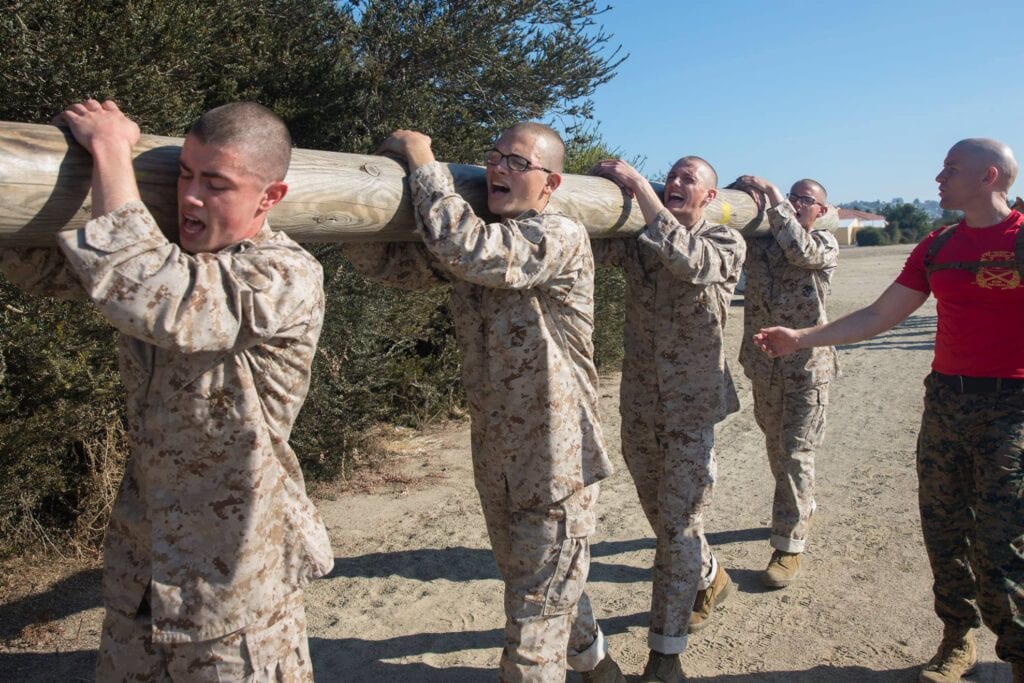 No matter how hard the task before you seems and no matter how tired, fed up, angry, weak or upset you are, never quit.  A drill instructor wants to see you put forth 100% at all times, even if your 100% is only equal to the next Marine’s 60%.  Quitting or giving up on any task regardless of how small or large it is will surely earn you a spot on the drill instructor’s list.  Once you have a drill instructor’s attention, it could take days and sometimes weeks before they move on from you.  When you quit, you will have the attention of all of your drill instructors and that’s not a place you ever want to be. If you’re quitting is noticed by your Senior Drill Instructor, then it’s pretty much game over for you.   Never quit.  Ignore the pain. Ignore the discomfort and push ahead. 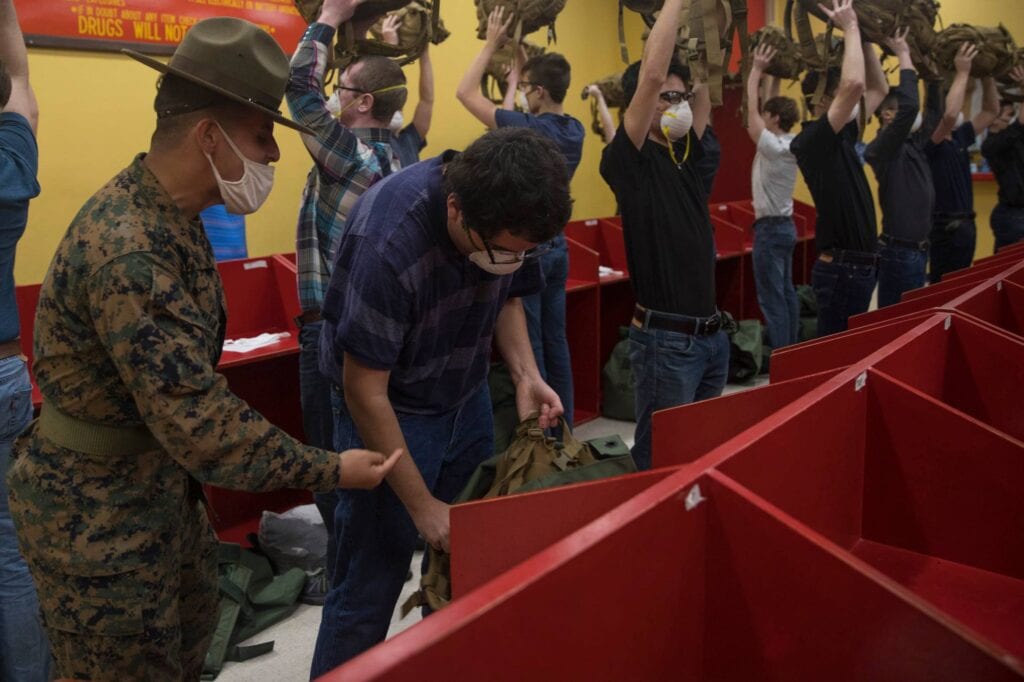 Your recruiters will probably tell you to show up at Parris Island or MCRD San Diego in light business casual attire.  Definitely do that.  Don’t show up trying to make any kind of fashion or political statement. Wear a pair of jeans, nice comfortable sneakers, and a polo shirt.  There’s no need to draw any attention to yourself.   Don’t show up with a fresh high and tight, also don’t show up looking like Jesus either.  Show respect for the Marine Corps by dressing respectfully.  There’s no need to draw unwanted attention to yourself in the first 24 hours upon your arrival. 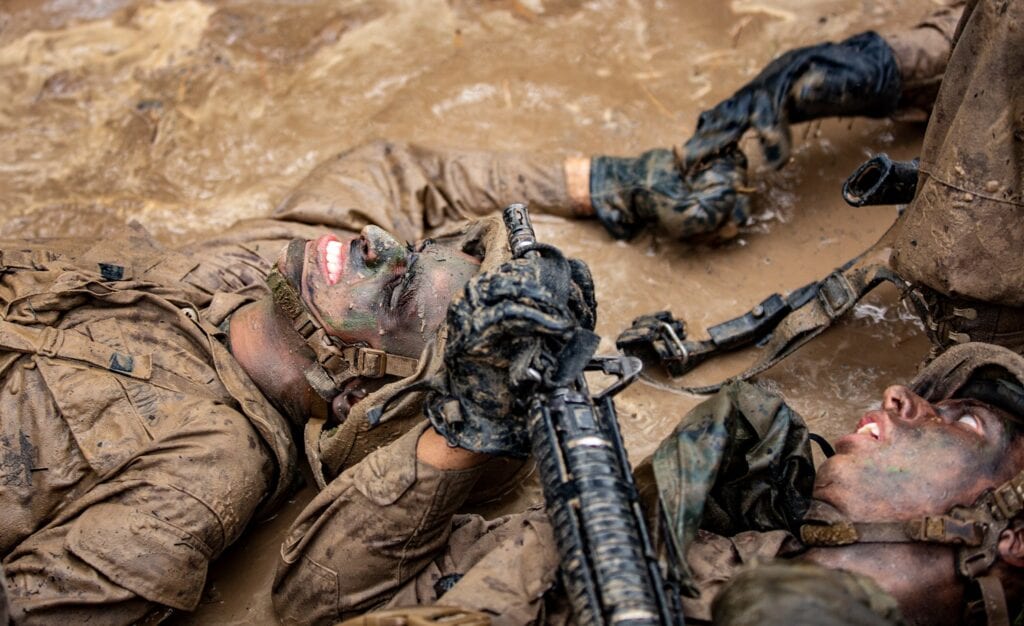 Take in as much as you possibly can during your 12-week time in boot camp. You might not understand this now, but you will remember every day of those 12 weeks for the rest of your life, the good times and the bad.  Nearly every Marine remembers boot camp like it was yesterday.  It can be a shocking and traumatic experience but know that the minute you arrive at Camp Lejeune or Camp Pendleton for infantry training, you will all be laughing about boot camp.   Don’t let the stress and pressure get to you, embrace everything that is laid before your feet in training and cherish every minute.  You’ll never be able to do it again and most people in America will never endure the adventure you’re about to embark upon. 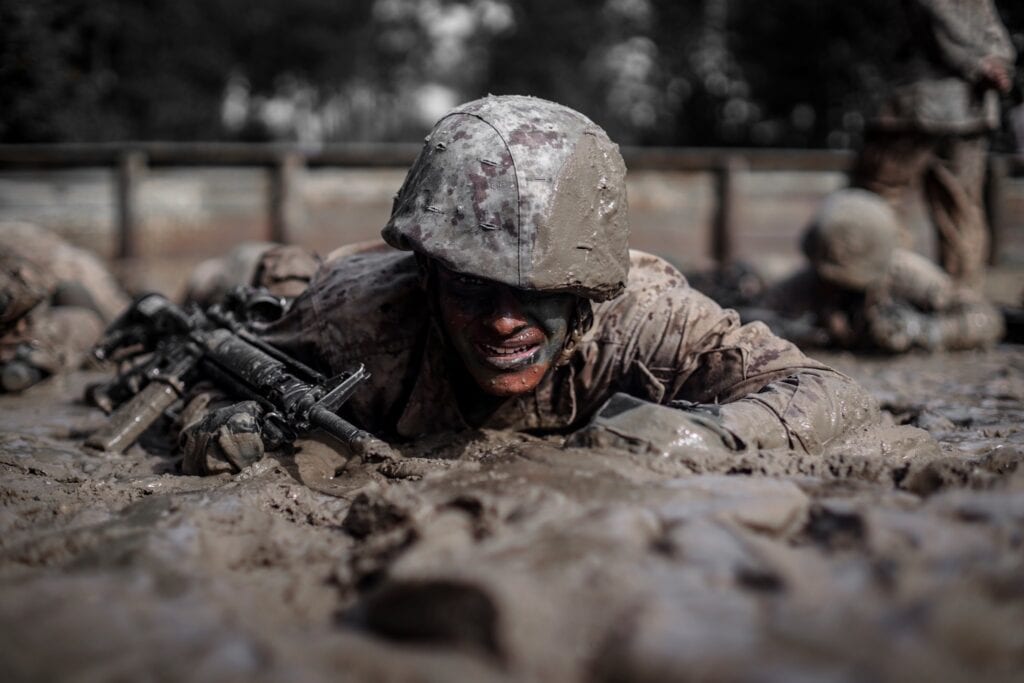 #1 The worst experiences will make for your best memories 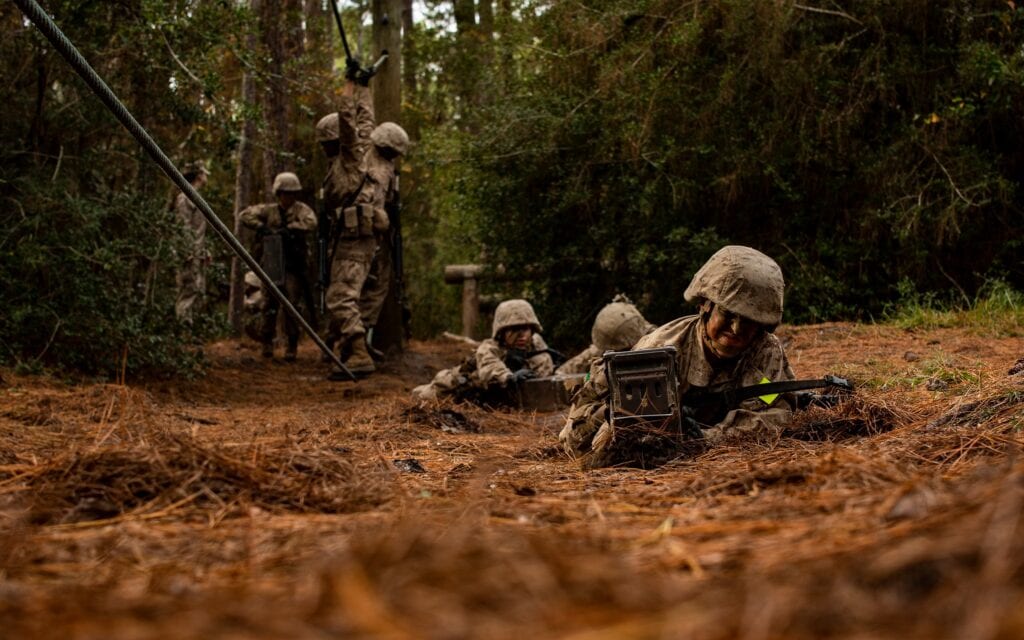 My best memories of boot camp are my absolute worst experiences.  Even though at the exact moment in time things are happening to you in boot camp, you might think it’s the worst moment of your life, that is the exact moment you will look back on and laugh at the most.  One of the bonds young Marines share is their common experiences, pain and suffering while at Parris Island or San Diego.