DAYTONA BEACH, FL – The Daytona Police Department responded to a crash between a car a fire engine 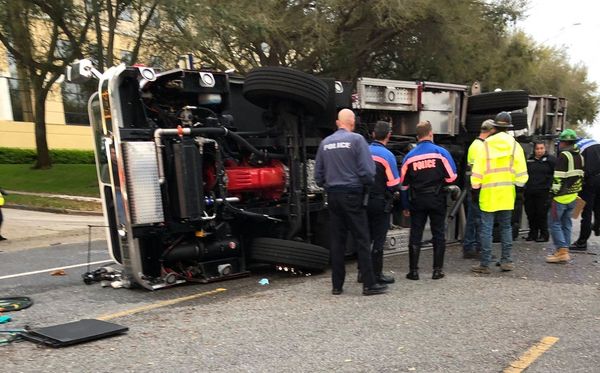 Investigators believe the Pontiac was going around 80 miles per hour in the southbound lanes of North Clyde Morris Boulevard as it hit the tail end of the DBFD truck just before the intersection of West International Speedway Boulevard / U.S. 92, causing it to flip over.

The DBFD truck had left the parking lot of the West Marine store nearby and was struck by the Pontiac as it attempted to cross the southbound lanes of Clyde Morris in order to head north on Clyde Morris.

Paramedics took the driver of the Pontiac to HHMC, where she passed away from her injuries shortly after arrival. Officers have since notified the woman’s next of kin.

Five firefighters in the DBPD fire truck suffered minor injuries and were treated at the scene.

No charges are expected. Photos by Daytona Beach Fire Department.

Three teens were charged for racist and antisemitic graffiti

Alligator caught on a fishing pole in Florida ocean surf