LAKEWOOD, NJ – A forest fire that burned through 170 acres between Lakewood Township and Brick Township continued to burn into the night as hundreds of firefighters from the region worked overnight to contain the fire.

The New Jersey Forest Fire Service continued suppression, patrol, and mop-up operations throughout the night, and support from local fire companies was scaled back throughout Sunday night as containment increased.

“The origin has been identified and the cause is under investigation, though we can state it was not from a prescribed burn as reported inaccurately online,” the Forest Fire Service said.

Two mixed-use professional/commercial structures were destroyed by the fire.

While the wildfire came close to residential areas, no homes were substantially damaged though some ancillary structures such as sheds were impacted.

Residents in the affected areas are urged to stay away from impacted areas and emergency response activity.

They also said to stop flying your drones in the area.

“Drones of any kind interfere with the fire-fighting effort and are prohibited in the area. Brick Township residents who were evacuated began returning home at 7:00 p.m. Sunday.
A New Jersey Forest Fire Service firefighter is in critical condition at a nearby hospital. 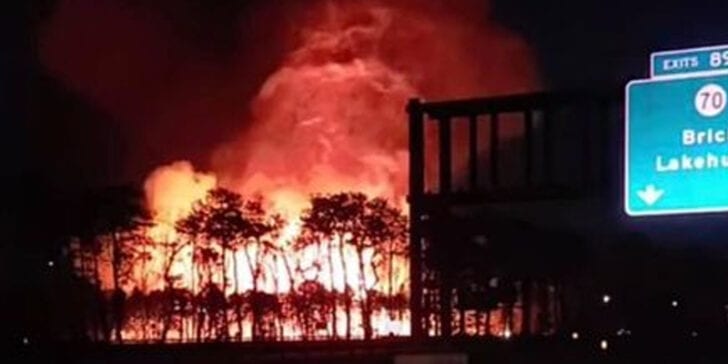 Dead dolphin found on the beach at the Jersey Shore