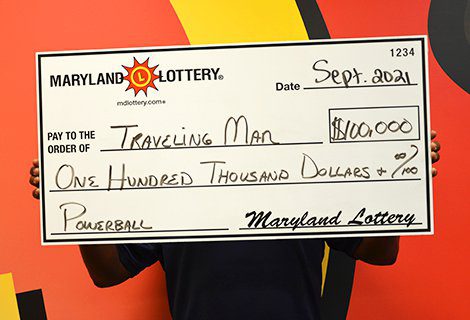 CATONSVILLE, MARYLAND – “Traveling Man” of Catonsville didn’t realize he won $100,008 playing Powerball until he was buying new tickets the next day and remembered to check his old ones.

“It brightened my eyes when I scanned my ticket,” said “Traveling Man,” who is using an anonymous name to tell his winning story.

A loyal Maryland Lottery player from Catonsville got a shock recently when he stopped by a gas station and checked some tickets he had in his pocket. One of them was a $100,008 Powerball winner.

A general manager with a territory that has him on the road a lot, “Traveling Man” enjoys playing a variety of Lottery games. On Sept. 8, he stopped at the Shell gas station at 6600 Security Boulevard in Woodlawn and bought some Pick 3 and Pick 4 tickets. He decided to add a quick-pick Powerball ticket to his purchase, too.

The 54-year-old regular player, however, had no idea about what the winning numbers were even as he headed to work. The Baltimore County resident stopped at another gas station, bought some Lottery tickets and then checked the tickets in his pockets. That’s when he realized what had happened.


Although he enjoys the thrill of playing and the occasional daydream of what he would do if he hit it big, “Traveling Man” follows a set process when he plays. “I got a limit,” he said, noting that he sticks to his Lottery spending limits as well as his limits on those rare occasions when he visits a casino.

He also describes himself as “very frugal.” While he toyed with the idea of getting a new luxury car with the proceeds of his Powerball hit, he ultimately decided to put it all in the bank and forgo any celebration. He will, however, continue playing in hopes of hitting big again.