BRASILIA – Brazil’s government is considering combining pandemic relief payments and “Bolsa Familia” welfare programs into a monthly stipend of 300 reais ($54.42) next year, according to an Economy Ministry official with direct knowledge of the matter.

The government is weighing that option due to budget constraints resistance in Congress to its proposed tax reform, said the source on Monday, requesting anonymity to discuss confidential policy debates.

Maintaining soon-to-expire pandemic relief is crucial for far-right President Jair Bolsonaro as he looks at his diminishing re-election chances in 2022 due to plummeting popularity over his handing of COVID-19, while a tight fiscal situation restricts his ability to spend.

Economy Minister Paulo Guedes had banked on a bill on federal government court-ordered debts going through to delay outlays, which would have allowed him to fund a new stipend called Auxilio Brasil without exceeding the spending ceiling.

He had also insisted on the need to approve tax reform, which provides for the taxation of dividends for the first time in Brazil. But though it passed the lower chamber, the Senate has not even got around to discussing the tax bill.

Earlier on Monday, Bolsonaro said “God willing” his government should resolve the issue this week and decide the details of the extension of the emergency aid stipend.

The current emergency aid pays between 150 and 375 reais per month to Bolsa Familia beneficiaries and other vulnerable Brazilians, but the last installment will be this month.

The extension of the stipend is considered vital to help people who were left unprotected by the coronavirus pandemic and have lost purchasing power due to increased inflation. It is also seen as a tool to raise Bolsonaro’s popularity going into an election year.

The emergency aid is aimed at benefiting more than 45 million people, a larger number than those that qualify for Bolsa Familia, which covers 14 million families. 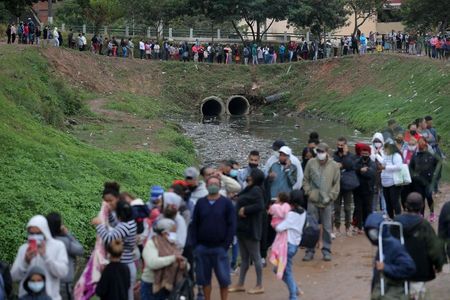