WASHINGTON – Production at U.S. factories fell by the most in seven months in September as an ongoing global shortage of semiconductors depressed motor vehicle output, further evidence that supply constraints were hampering economic growth.

Manufacturing production last month was also weighed down by the lingering effects of Hurricane Ida, which also severely disrupted output at mines. The report from the Federal Reserve on Monday followed on the heels of data last week showing a solid rise in inflation in September. Though retail sales rose last month, that reflected higher prices for motor vehicles.

“While the hurricane disruption and weather effects will fade, labor and product shortages are still worsening, which will continue to weigh on manufacturing output over the coming months and quarters,” said Michael Pearce, a senior U.S. economist at Capital Economics in New York.

Manufacturing output dropped 0.7% last month, the largest decline since February. Data for August was revised down to show production falling 0.4% instead of rising 0.2% as previously reported. It was only the second time since April 2020, when mandatory closures of nonessential businesses were enforced to slow the first wave of COVID-19 infections, that manufacturing output fell for two straight months.

Economists polled by Reuters had forecast manufacturing production edging up 0.1%. Output increased 4.8% compared to September 2020. Manufacturing, which accounts for 12% of the U.S. economy, remains underpinned by businesses desperate to replenish stocks after inventories were drawn down in the first half of the year amid strong demand for goods.

Spending shifted to goods from services over the course of the pandemic, straining supply chains. The rotation back to services, such as travel and dining out, has been slowed by a resurgence in coronavirus infections over the summer, driven by the Delta variant.

Production at auto plants tumbled 7.2% after dropping 3.2% in August. The global shortage of microchips is forcing automakers to cut production. There is also a shortage of workers at ports, which is causing congestion and holding up the delivery of raw materials.

Motor vehicle assembly dropped to an annualized rate of 7.78 million units, the lowest since April 2020, from a pace of 8.82 million units in August.

With autos and consumer energy products output tumbling, consumer goods production fell 1.9% last month. There were, however, increases in the production of primary metals and electrical equipment, appliances and components as well as furniture and related products.

Stocks on Wall Street were lower. The dollar was steady against a basket of currencies. U.S. Treasury prices fell.

A shortage of motor vehicles helped to drive up inflation in September, through very high prices, and flattered retail sales. The dearth of automobiles is also frustrating efforts to rebuild inventories. The combination of higher inflation, which is cutting into consumer spending, and moderate inventory build has led economists to anticipate that economic growth slowed sharply in the third quarter.

The Atlanta Fed is estimating that gross domestic product growth braked to a 1.2% annualized rate last quarter. The economy grew at a 6.7% pace in the second quarter.

“Perhaps a silver lining in this difficult supply environment today is that manufacturers will have plenty of work ahead of them once they are able to secure the inputs and help they need,” said Tim Quinlan, a senior economist at Wells Fargo in Charlotte, North Carolina.

Labor and building material shortages are also impeding the housing market. A survey from the National Association of Home Builders on Monday showed sentiment among single-family homebuilders rising in October amid strong demand. But builders complained that “ongoing supply chain disruptions and labor shortages are delaying completion times and putting upward pressure on building material and home prices.”

Last month’s decline in manufacturing output combined with a 2.3% decrease in mining and a 3.6% drop in utilities to pull down industrial production by 1.3%. The largest drop in industrial output in seven months followed a 0.1% dip in August. Mining was weighed down by the aftermath of Ida, while demand for utilities subsided following a warmer-than-usual August.

Industrial production rose at a 4.3% rate in the July-September quarter, notching its fifth straight quarter of growth of at least 4%.

Capacity utilization for the manufacturing sector, a measure of how fully firms are using their resources, fell 0.6 percentage point in September to 75.9%. Overall capacity use for the industrial sector dropped 1.0 percentage point to 75.2%. It is 4.4 percentage points below its 1972-2020 average. 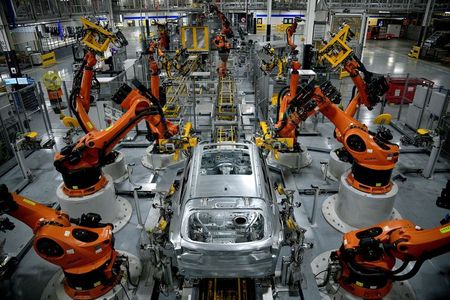