– Thousands of workers remain on strike across the United States demanding higher pay and better conditions despite Hollywood make-up artists and camera operators reaching a deal over the weekend to avoid a walkout, and the tight jobs market has only emboldened them.

Kevin Bradshaw is an employee at Kellogg Co’s cereal plant in Memphis, Tennessee, where most of North America’s Frosted Flakes are made. He feels anything but great about cuts to healthcare coverage, retirement benefits and vacation time that union officials say the company is pushing for from about 1,400 workers on strike since Oct. 5 at plants in Michigan, Nebraska, Pennsylvania and Tennessee.

“Enough is enough,” said Bradshaw, vice president of Bakery, Confectionary, Tobacco Workers and Grain Millers International Union Local 252G at the Memphis plant. “We can’t afford to keep giving away things to a company that financially has made record-breaking returns.”

Some 60,000 behind-the-scenes workers on movies and TV shows on Saturday avoided joining the Kellogg strikers, but the near-walkout was the latest demonstration of force by union members who say they are fed up with meager or no raises and other givebacks. Kellogg officials could not be reached for comment but have said the company’s compensation is among the industry’s best.

Labor activists complain that while many of their members were deemed essential during the COVID-19 crisis, that has not been reflected in how they are treated by employers. With an administration in the White House that they see as sympathetic and a job market that saw a record number of Americans quitting in August, unions are ready to test companies’ resolve.

So far, at least 176 strikes have been launched this year, including 17 in October, according to Cornell University’s Labor Action Tracker.

“Workers are on strike for a better deal and a better life,” Liz Shuler, president of the AFL-CIO, the nation’s biggest labor federation, said last week at a SABEW journalism conference.

“The pandemic really did lay bare the inequities of our system and working people are refusing to return to crappy jobs that put their health at risk,” she added, noting that the term #Striketober was trending on Twitter.

Despite some setbacks, including a failed organizing drive earlier this year at an Amazon.com facility outside Birmingham, Alabama, union leaders feel the stars are aligned for them to make gains.

“We have entered a new era in labor relations,” said Harley Shaiken, professor emeritus of labor at the University of California Berkeley. “Workers feel they’re in the driver’s seat and there’s plenty of lost ground to make up.”

“What we’re seeing is a fight to return or at least stay in the middle class,” he said.

SUPPORT IN THE WHITE HOUSE

Union membership has been declining steadily in recent decades, falling to under 11% of employed Americans in 2020 from 20% in 1983, according to the U.S. Bureau of Labor Statistics.

However, 68% of Americans now approve of unions, the highest proportion since 1965, according to a Gallup poll in August, and that rate climbs to almost 78% for those aged 18 to 29.

Helping fuel the hopes of union leaders is the widespread view among organizers that President Joe Biden is the most pro-union president in modern times. In April, the Democrat created a task force to promote labor organizing.

Two months earlier, he defended workers’ rights to form unions in the run-up to the unsuccessful push to organize Amazon workers in Alabama. The teamsters have vowed to continue trying to organize the company’s warehouse operations.

Other setbacks for unions have included in Beaumont, Texas, where Exxon Mobil locked out 650 workers from its refinery and an adjacent plant in May after a local United Steelworkers union refused to submit a contract proposal. Union leaders have scheduled a vote on the contract for Tuesday, but have urged members to reject it.

Exxon said the lockout was necessary to avoid the disruption of a possible strike and the changes to seniority it wants to impose were needed to ensure profitability. Meanwhile, some union members have moved to decertify the union.

In some sectors the discontent has been striking: 90% of Deere & Co’s hourly workers, represented by the United Auto Workers (UAW) union, rejected the company’s contract offer last week and went on strike.

Deere declined to comment, but after UAW members voted to go on strike the company said it wanted to maintain its employees’ position as the highest paid in the industry.

The behind-the-scenes workers in Hollywood, represented by the International Alliance of Theatrical Stage Employees (IATSE), had sought reduced working hours, more rest periods, meal breaks and pay increases for those at the bottom of the wage scale.

While the Hollywood workers avoided a strike, the picket lines could still become more crowded.

More than 28,000 healthcare workers at 13 Southern California Kaiser Permanente hospitals and hundreds of medical centers voted overwhelmingly earlier this month to authorize a strike. They want more pay and higher levels of staffing to reduce burnout worsened by the pandemic.

That demand is echoed by nearly 2,000 healthcare workers who have been on strike since Oct. 1 in Buffalo, New York.

“We’ve been working short at Mercy for five years,” Kathy Kelly, who has been a nurse for 38 years at the Catholic Health System’s Mercy Hospital, said while on break from picketing. “Enough’s enough. We can only give so much.”

(Reporting by Ben Klayman in Detroit; Additional reporting by Erwin Seba in Houston, Julia Love and Jeffrey Dastin in San Francisco, and Kannaki Deka in Bengaluru; Editing by Daniel Wallis) 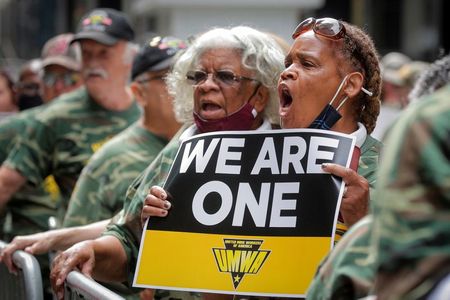 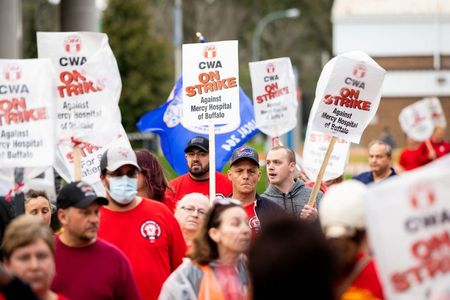