BEIRUT -The leader of Lebanon’s Iran-backed Shi’ite group Hezbollah said on Monday that last week’s Beirut violence in which seven Shi’ite Muslims were shot dead was a dangerous development and marked a new phase in the country’s internal politics.

In his first remarks since the worst street violence in over a decade, Sayyed Hassan Nasrallah lashed out at the Christian Lebanese Forces (LF) party and its head Samir Geagea, repeating accusations that they were responsible for the killings on Thursday.

“The real agenda of the Lebanese Forces is civil war,” he said in a live televised speech, adding that the army was the guarantee against such a conflict in the country and that his group would not be dragged into one.

Nasrallah showcased Hezbollah’s power, stressing the group had 100,000 fighters but pointing out they were recruited to defend Lebanon from external enemies not to engage in a civil war.

Heavy gunfire erupted in Beirut’s southern suburb of Dahiya, a Hezbollah stronghold, to celebrate the start of Nasrallah’s speech, which came amid tensions over the investigation of last year’s devastating explosion at the capital’s port.

Nasrallah said Hezbollah, which has become one of the most powerful players in Lebanese politics, was not the enemy of Lebanese Christians.

“The biggest threat to the Christian presence in Lebanon is the Lebanese Forces party and its head,” Nasrallah said.

The bloodshed, which stirred memories of the 1975-1990 civil war, added to fears for the stability of a country that is awash with weapons and suffering an economic meltdown.

The LF has denied it started the fighting last week. It blamed the violence on Hezbollah “incitement” against Tarek Bitar, the lead investigator in an investigation into the port explosion.

It also accused Hezbollah of sending supporters into the Christian neighbourhood of Ain al-Remmaneh where it says four residents were wounded before a shot was fired.

Nasrallah said some of them may have shouted provocative slogans as they approached the Christian area and that it was wrong, but then gunfire started and people were killed.

“I advise the Lebanese Forces party to give up this idea of internal strife and civil war,” said Nasrallah.

“You are wrong 100 percent, your calculations are wrong. The region has never seen Hezbollah as strong as it is now.”

Despite his tough stand, Nasrallah dedicated a significant part of his speech to trying to reassure Lebanon’s Christians, saying Hezbollah was protecting their rights and is allied with the largest Christian party, the Free Patriotic Movement.

The seven victims were killed as crowds headed for a demonstration called by Amal and Hezbollah to protest against Bitar.

Nasrallah reiterated his objection to the blast probe, which he has said is not objective, saying the way it was being handled would not lead to truth or justice.

Amal, which is led by Lebanese parliament speaker Nabih Berri, one of the most powerful political figures in the country, urged the authorities to arrest all those responsible for the violence.

The inquiry into the Aug. 4, 2020 explosion, which killed more than 200 people and devastated swathes of Beirut, has made little headway amid pushback from political factions, including Hezbollah. 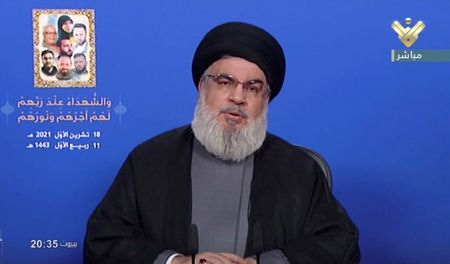