SANTIAGO -Demonstrations took place across Chile on Monday to mark the second anniversary of the start of months of protests against inequality that triggered a social shift and led to formation of a representative assembly to redraft the country’s constitution.

Thousands of people attended events throughout the day. Most of the gatherings were peaceful, having been convened by way of social networks in various cities. But some of Monday’s demonstrations turned violent. Some looting was reported and a car set ablaze.

The 2019 protests – a mix of large, peaceful marches and smaller, violent riots – left about 30 people dead and a trail of destruction around the capital, Santiago.

“That social unrest is being channeled into building up our democracy,” Pamela Figueroa, a political scientist at the University of Santiago, told Reuters. “This is a moment of commemoration regarding the country we must build.”

Chile is polarized ahead of presidential and legislative elections on Nov. 21, with voters set to choose between a resurgent left pledging social change and conservatives who would stick closer to the status quo.

In the so-called Plaza de la Dignidad, the bastion of the 2019 protests in Santiago, various marches converged from different parts of the city, causing massive traffic jams, while some subway stations were closed. Protesters launched fireworks and lit bonfires, sparking some skirmishes with police.

Lawmaker and former student leader Gabriel Boric is leading the presidential race in opinion polls, supported by a leftist coalition. Far-right former lawmaker José Antonio Kast has gained as well, with one poll showing him ahead.

Last year, tens of thousands of Chileans gathered in the streets to mark the first anniversary with peaceful rallies – which by nightfall devolved into riots and looting, with mobs firebombing a police headquarters and at least two churches.

“We cannot commemorate, much less celebrate, if we have not won anything yet,” read a billboard at the building where an elected assembly is drafting the new constitution 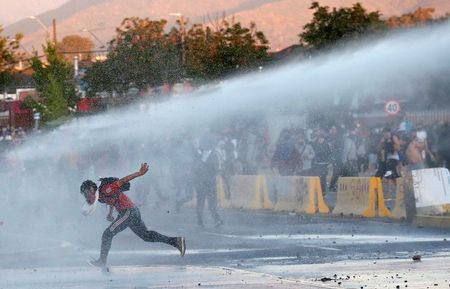