NEW YORK – A Russian businessman funded an account used by two ex-associates of Rudy Giuliani to donate to U.S. political campaigns, according to documents shown in court on Monday.

Prosecutors presented the financial records to a Manhattan federal court jury in the second week of the trial of one of the former associates, Lev Parnas, on charges of violating campaign finance laws.

That account then paid off more than 99% of the balance on a credit card account Parnas, Fruman and a company they founded used to make more than $150,000 in donations to candidates and committees ahead of the Nov. 6, 2018 election, the records showed.

The case has drawn attention because of the role Parnas and Fruman played in helping Giuliani – Donald Trump’s former personal attorney and a former New York City mayor – investigate Joe Biden ahead of the 2020 election. Biden, a Democrat, defeated Republican Trump’s re-election bid.

Giuliani’s attorney has said the Parnas case is separate from a federal inquiry into whether Giuliani violated lobbying laws while working as Trump’s lawyer. Giuliani has not been charged with any crimes and denies wrongdoing 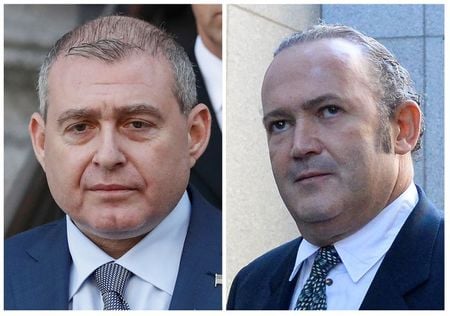