– Manchester City manager Pep Guardiola has encouraged players to get vaccinated against COVID-19 after the recent rise in cases in Britain.

On Sunday, Britain reported 45,140 new cases of COVID-19, the highest daily number since the middle of July, and 57 new deaths within 28 days of a positive test.

Guardiola did not comment on his squad’s vaccination status, saying it was “private”, but added that he and his family have been vaccinated.

“I have my own opinions, I trust the doctors and scientists. If they say it’s the best way to protect the people, you should do it,” Guardiola told a news conference on Monday on the eve of City’s Champions League Group game at Club Brugge.

“Myself and my family have done it. The doctors will talk with the players individually and after that they have to decide.

“We see in England how many deaths there still are and people get the virus and are suffering. We have to move forward, stay safe, be careful, use the masks, use the vaccines for better for the society and for themselves.”

Guardiola said goalkeeper Ederson and forward Gabriel Jesus could be in contention to face Brugge on Tuesday.

The Brazil internationals will meet up with the rest of the squad at the team hotel in Belgium, Guardiola added, as they would have had to spend 10 days in quarantine if they arrived in England after the international break.

City are third in Group A on three points from two games, one off Brugge, who are second on goal difference behind Paris St Germain.

(Reporting by Hritika Sharma in Bengaluru; Editing by Ken Ferris) 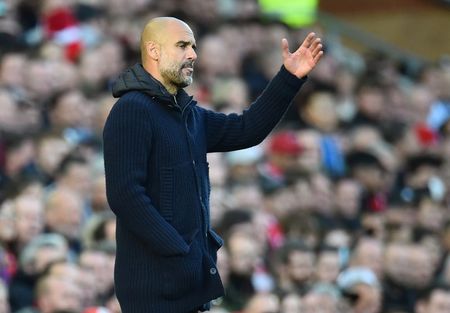