The 29-year-old was among a number of players not involved in PSG’s 2-1 Ligue 1 win over Angers on Friday due to their involvement in World Cup qualifying games.

“The priority is always the wellbeing of the player,” Pochettino told a news conference. “Neymar has a little problem which we hope he will only last for a few days and he will be back with the squad as soon as possible.”

“Neymar Jr had some pain in his groin since returning from international duty and will undergo more treatment over the next few days before returning to full training,” PSG added in a statement https://en.psg.fr/teams/first-team/content/medical-update-paris-saint-germain-rb-leipzig-uefa-champions-league-2021-2022.

Midfielder Leandro Paredes and defender Sergio Ramos are also ruled out of Tuesday’s game through injury, the statement said.

PSG are currently top of Group A with four points from two games, while Leipzig are bottom and have yet to pick up a point.

(Reporting by Hritika Sharma in Bengaluru; Editing by Christian Radnedge) 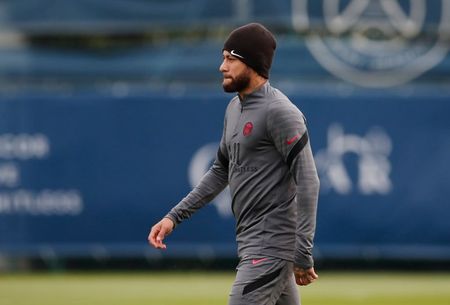