MEXICO CITY -Mexico’s manufacturing sector stands to benefit from a U.S. transition away from fossil fuels including through the creation of jobs for making electric vehicles, John Kerry, climate adviser to U.S. President Joe Biden, said on Monday.

“Mexico’s industrial base, already deeply integrated with the rest of North America, absolutely stands to benefit from the energy transition,” Kerry said alongside Mexican President Andres Manuel Lopez Obrador in Mexico’s Chiapas state, near the southern border with Guatemala.

Kerry traveled to Mexico to meet with his counterparts ahead of the upcoming United Nations’ COP26 climate conference in Glasgow, Scotland, which neither Lopez Obrador nor his foreign minister is expected to attend.

“When we switch from gasoline to electrified vehicles, there are going to be a lot of good-paying jobs here in Mexico because of the connection already of the automobile industry and our two countries,” said Kerry, who visited a flagship reforestation project promoted by Mexico.

The production of automobiles in North America is highly integrated through the U.S.-Mexico-Canada trade agreement.

While the Biden administration has stressed the need for more aggressive action to address global warming, negotiations of a U.S. bill to invest up to $3.5 trillion to expand social programs and attack climate change still hang in the balance, with some Democrats resigned to the growing likelihood that a proposal to reduce carbon emissions will be weakened or scrapped.

“We’re going to support the plan that President Biden is promoting through Mr. John Kerry. … President Biden has an ally in advocating for climate policy to confront climate change,” said Lopez Obrador, without giving details.

Still, the Mexican leader has cut his environment ministry’s budget as part of an austerity drive and dismantled policies promoting private investment in renewable energy.

Research coalition Climate Action Tracker rates Mexico’s overall climate plan as “Highly Insufficient,” saying its policies and actions will “lead to rising, rather than falling, emissions and are not at all consistent with the Paris Agreement’s 1.5°C temperature limit.”

Lopez Obrador says he will tackle carbon emissions by revitalizing dilapidated hydropower projects under state control and through the tree planting program, called Sembrando Vida, which aims to plant 700,000 trees and employ 450,000 farmers.

But he has also focused on reviving state-run oil and power generation companies, and his government has prioritized fossil fuels over renewable energy sources for Mexico’s national grid.

Mexico, the second-largest greenhouse gas emitter in Latin America, is seen as vulnerable to climate change and extreme weather patterns, with tropical cyclones and floods battering the country every year.

By 2030, Mexico plans to reduce greenhouse gas emissions by 22% over a business-as-usual scenario. Brazil, the region’s biggest polluter, aims to cut its emissions by 43% by 2030 compared to 2005 levels. 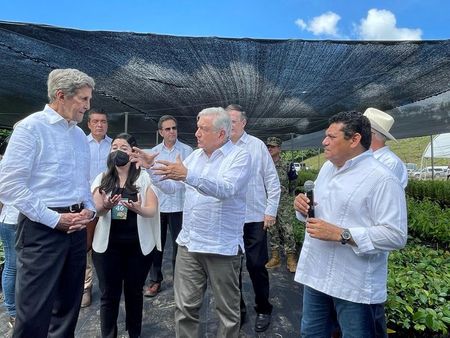