WASHINGTON -President Joe Biden will host separate meetings on Tuesday with moderate and progressive Democratic lawmakers who are wrangling over aspects of his infrastructure and social spending bills, the White House said on Monday.

Moderate and left-leaning progressive members of Congress have been at odds over the scope of what was initially a $3.5 trillion bill focused on social spending and climate change. A separate infrastructure bill with bipartisan support has been held up while differences over the larger bill get worked out.

Biden has conceded that the so-called reconciliation budget bill will end up having to be less costly and less ambitious in scope than first proposed, but talks are ongoing about how to do that.

One piece considered critical to Biden’s climate goals, a mechanism to replace coal- and gas-fired power plants with wind, solar and nuclear energy, may be dropped https://www.reuters.com/world/us/key-part-bidens-climate-agenda-likely-be-cut-manchins-opposition-nyt-2021-10-15 from the larger bill because of opposition from U.S. Senator Joe Manchin of West Virginia.

Psaki said on Monday that climate aspects would remain part of the legislative push.

“It is absolutely pivotal that these pieces of legislation have climate components, and they will,” she said. 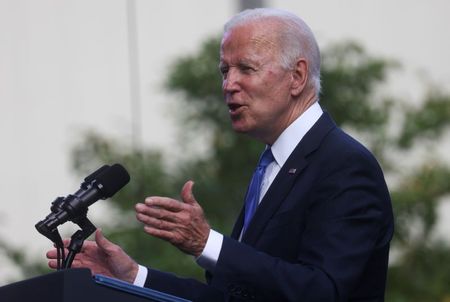