NEW YORK – The launch of the first bitcoin futures exchange traded fund (ETF) on Tuesday marks a major step toward legitimizing the cryptocurrency, but some ETF investors may face higher costs compared with buying the digital currency itself.

Barring any last-minute objection from the U.S. Securities and Exchange Commission, the ProShares Bitcoin Strategy ETF will begin trading on Tuesday. ProShares will be backed by the CME Group’s bitcoin futures instead of the actual virtual asset itself.

Its offering is expected to lead to more launches of futures-based ETFs in the coming days and weeks after years of regulatory roadblocks.

Market participants overall lauded the ease and relative safety of owning an ETF instead of buying bitcoin from cryptocurrency exchanges and brokers. Investors won’t have to worry about custody and securing their digital wallets, although analysts said there are top-tier exchanges that offer these services to their customers as well.

“There is no free lunch, however,” said Martha Reyes, head of research at digital asset prime brokerage and exchange BEQUANT.

“An ETF based on futures is not ideal as there is a cost to rolling into the futures contracts, given contango … translating into underperformance versus the underlying asset,” she said.

Traders typically roll over futures to switch from the short-term contract that is approaching expiration to another contract further out in months. This rollover entails a cost.

When futures are in so-called “contango,” a term more commonly heard in commodity markets than financial futures, prices are higher in longer-term contracts than on the front end. That means as contracts approach settlement day, the ETF will have to sell lower-priced futures and buy higher-priced ones, which will erode returns every time contracts roll off.

“So one problem is being solved, but at a cost to the investor in poorer overall return when compared to some of the ETPs (exchange traded products) in Europe,” said Bradley Duke, chief executive officer at ETC Group, the largest provider of ETPs in Europe.

A futures-based ETF price will not necessarily match the current price of the underlying asset. In most cases, futures ETFs based on commodity assets such as gold tend to underperform physical ETFs, said Mikkel Morch, executive director at crypto and digital assets hedge fund ARK36.

In addition to the risk of a futures-based bitcoin ETF underperforming bitcoin, it also comes with the cost of the futures roll-over, some analysts said.

All the same, analysts believe investors will still buy the futures-based ETF despite the higher cost.

“Both these regulations provide strong investor protections. There is a rich history of strong enforcement of such regulations, which creates a high level of financial stability and integrity.”

At a Financial Times conference a few weeks ago, U.S. SEC Chairman Gary Gensler repeated his support for bitcoin ETFs that would invest in futures contracts instead of the digital currency itself.

But bitcoin futures are subject to margin and collateral requirements as well as other limits that may prevent the ETF from achieving its objective of generating returns, according to ProShares’ prospectus. It’s an investment that is fraught with risk especially when the ETF’s price declines.

Among fund managers who have applied to launch bitcoin ETFs in the United States are the VanEck Bitcoin Trust, ProShares, Invesco, Valkyrie and Galaxy Digital Funds.

Late on Monday Invesco said it was not planning to pursue the launch of a bitcoin futures ETF in the immediate near-term.

The Nasdaq on Friday approved the listing of the Valkyrie Bitcoin Strategy ETF, while Grayscale, the world’s largest digital currency manager, plans to convert its flagship product, the Grayscale Bitcoin Trust into a spot bitcoin ETF, CNBC reported on Sunday.

Bitcoin late on Monday hovered near a six-month high. The world’s largest cryptocurrency last stood at $62,104, not far from its all-time peak of $64,895 hit in April. 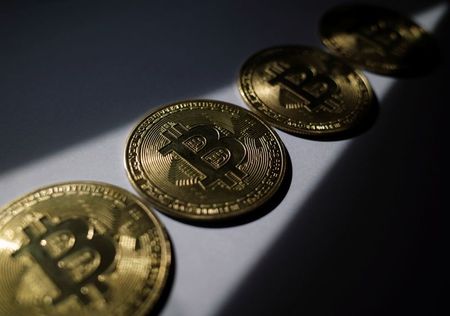