– Apollo Global Management Inc said on Tuesday it expected its assets under management to more than double to $1 trillion by 2026 as it expands its businesses across insurance, credit and private equity.

Apollo trails Blackstone Group Inc, the world’s largest alternative asset manager, which announced in 2018 that it would also grow its assets under management to $1 trillion by 2026. Blackstone had $684 billion in assets as of the end of June.

“We are in the excess return business and assets are what is in short supply, not capital,” Apollo Chief Executive Marc Rowan said during an investor day event.

Rowan said its insurance platform, led by annuities provider Athene Holding Ltd, will be a key driver in expanding its assets under management and earnings over the next five years.

That is because Athene has the capacity to amass significant outside capital without much fundraising, allowing Apollo to generate profit from its fixed-income investments at low costs and from even low rates of return, Rowan said.

Apollo had $472 billion in assets under management as of the end of June. 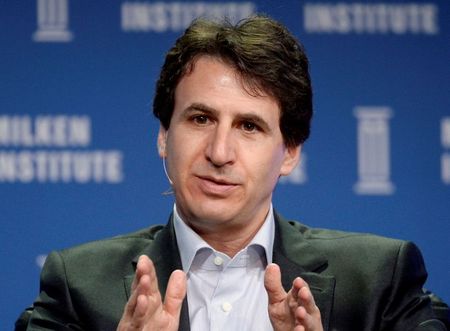