BEIJING -China’s coal futures fell 8% to their downward limit in night trading on Tuesday as the state planner said it was looking at ways to intervene and bring record high prices of the fuel back down to a “reasonable range”.

The most-traded thermal coal contract on the Zhengzhou Commodity Exchange, for delivery in January, fell to 1,755.40 yuan ($275) a tonne, having touched an all-time peak of 1,982 yuan in Tuesday’s daytime session amid a widening power crunch and the onset of cold weather.

A shortage of coal, China’s main fuel for power generation, has led to electricity rationing for industry in many Chinese regions and dented economic growth in the world’s second-biggest economy.

The 8% drop in coal futures was the steepest plunge since August, although prices are still up some 260% year-to-date. On the Dalian Commodity Exchange, prices for steelmaking raw materials coke and coking coal fell around 9%.

The sell-off came after the National Development and Reform Commission (NDRC) said government intervention in coal prices was discussed at a meeting of key coal producers, the industry association and the China Electricity Council on Tuesday.

“The current price increase has completely deviated from the fundamentals of supply and demand,” the NDRC said. “The heating season is approaching and the price is still showing a further irrational upward trend.”

Chinese law allows the State Council, China’s cabinet, and regional governments to limit profit rates and set price limits when prices for important goods or services rise sharply, the NDRC said, vowing to crack down on any irregularities and maintain market order.

Coal shortages in China are due to a mix of factors including a surge in demand post-pandemic, low stocks and supplies being hit by extreme weather and transport-related disruptions.

In a separate statement, the NDRC said it would ensure coal mines operate at full capacity and aim to achieve at least 12 million tonnes per day of output.

It put the production rate at a 2021 high of over 11.6 million tonnes as of Oct. 18, up more than 1.2 million tonnes from late September after an all-out effort to boost supply that has included approvals for new coal mines.

In a third statement, the NDRC said the Zhengzhou exchange should pay close attention to coal price fluctuations and said it would step up supervision of prices, while cracking down on speculation – something the Chinese authorities have repeatedly blamed for high commodity prices this year.

The Zhengzhou bourse said that from Wednesday’s night session it would raise the trading limit on thermal coal contracts to 10% and imposed limits on some members’ trading positions. 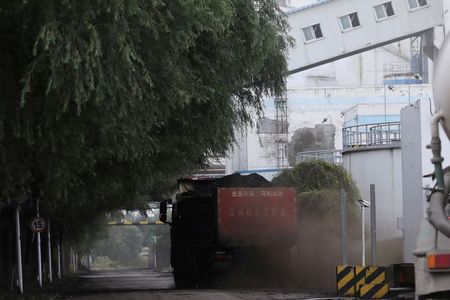