MADRID – A group of survivors of a mass rapeseed oil poisoning 40 years ago have occupied Madrid’s El Prado Museum and have threatened to commit suicide if the Spanish government does not respond to their demands.

Here are some key facts about the scandal over what was Spain’s worst food poisoning epidemic.

* The outbreak of toxic oil syndrome took place in Spain in 1981. It was attributed to the consumption of rapeseed cooking oil that had been denatured with 2% aniline (phenylamine).

* The substance was originally for industrial use but was adulterated and illegally sold as olive oil, mostly in street markets, starting in Madrid then spreading to other areas.

* Symptoms ranged from lung failure and limb deformation to the destruction of the body’s immune system. Many survivors were crippled for life.

* About 100,000 individuals were exposed and clinical disease occurred in 20,000 people, 10,000 of whom were hospitalized, according to Science Direct website. More than 300 victims died and many more were left with chronic disease, Science Direct said.

* According to the survivors’ organisation Seguimos Viviendo more than 5,000 people have died over the years and there are 20,000 surviving victims with poor quality of life and incurable afflictions.

* The victims’ group says that part of the aid they were given was later deducted when they received compensation payments, and the government has never honoured the victims.

* In 1989, judges dismissed murder charges against the distributors of the adulterated cooking oil after the longest trial in Spanish history. They ruled that none of the 37 accused had intended to cause death or injury. Some were found guilty of importing the oil and tampering with it and given prison sentences, but 24 defendants were fully acquitted. The ruling caused an uproar. 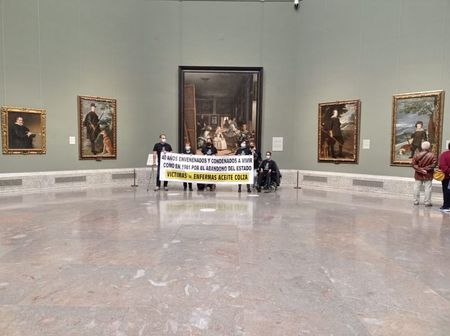