BUDAPEST – Hungary’s central bank raised its benchmark base rate by 15 basis points to 1.8% as expected on Tuesday and pledged to act “in the most decisive manner” against rising inflation risks.

“We are preparing not for a sprint run but a long distance run,” Virag told a business conference after the rate meeting, adding monetary policy would remain proactive.

“We will continue to act against inflation risks in the most decisive manner.”

As the rate-setters met, Prime Minister Viktor Orban’s chief economic aide said the bank’s tightening cycle was “half-hearted” compared with the massive fiscal impulse from his government, resulting in a policy divergence.

In its policy statement, the bank said it would keep its weekly bond purchases at 40 billion forints, after a reduction last month, and would prepare further steps to preserve the stability of the swap market.

In a Reuters poll, 21 of 22 economists had expected a 15 basis point hike on Tuesday and the remaining one a 30 basis point increase.

The Hungarian economy – along with others in Central Europe – is struggling with soaring energy costs, tight labour markets and rising wages.

“Inflation is expected to rise further in the autumn months. The significant rise in commodity prices in recent weeks points to a higher inflation path in the short run than expected in September,” the central bank said in its statement.

Headline inflation rose to a nine-year-high of 5.5% in September.

The region’s central banks have all tightened policy to blunt the inflation spike, but to differing degrees.

The Hungarian central bank slowed the pace of its own progressive tightening in September, to 15 basis points, which has since weakened the forint currency.

The forint eased to 362.25 versus the euro after the bank’s comments, from levels around 360 before the rate decision.

(Reporting by Krisztina Than; editing by John Stonestreet and Bernadette Baum) 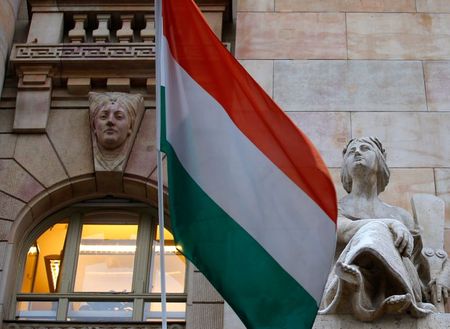