SYDNEY (Reuters) – The cost of the 2032 Brisbane Olympics is likely to exceed the A$5 billion ($3.72 billion) estimate in the pitch document but the Australian government would ensure it was spent wisely, sports minister Richard Colbeck said on Tuesday.

The federal government has promised to contribute 50% of the costs of Australia’s third Summer Olympics and Colbeck admitted it had been blindsided by a Queensland government announcement of a A$1 billion rebuild of Brisbane’s Gabba cricket ground.

“The Gabba announcement was a bit of a surprise to a lot of us, but that’s what’s prompted the process that we’ve put in place now, the agreement … with respect to 50/50 funding of the Game’s infrastructure.”

The Brisbane bid had placed great emphasis on using existing venues to stage the Games, including the rebuilt Gabba to host the opening and closing ceremonies as well as the athletics.


Exactly what costs should be allocated to the Games is always a matter of some confusion as cities often use the hosting of the event to upgrade wider city infrastructure.

Beijing organisers claimed an operating profit of 1 billion yuan ($155.93 million) from staging the 2008 Olympics but the cost to the city, including a new airport and subway line as well as factory closures, was estimated at $40 billion.

Colbeck said the federal government had made it clear to the Queensland government that the funding agreement came with conditions.

“That goes to the arrangements that we agree to form the organising committee, but there’s also going to be an inter-governmental agreement between the states and the Commonwealth …

“That will provide us with a genuine partnership in the overall process of delivery of that infrastructure, including some of the strategic decision-making that’ll be undertaken as well.” 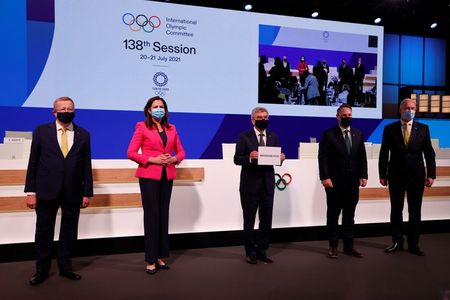