– The United States Olympic and Paralympic Committee (USOPC) said on Tuesday it will prioritise educating its athletes on global issues ahead of the 2022 Beijing Olympics where some could enter the debate about China’s human rights record.

The USOPC said its athletes are encouraged to support the values of the Olympic movement, which include non-discrimination and equality for all, and it is not unexpected that some would feel strongly about issues in the world that may impact that.

USOPC Chair Susanne Lyons, speaking on the final day of the virtual Team USA media summit, said the Beijing Olympics will offer a chance for sport to speak for unity, global peace and for the rights of people around the world.

“We really have no opportunity, since we are not a government, to influence the activities of another country’s rules and regulations and treatment of the people within their own country,” said Lyons.

Activists have urged the International Olympic Committee (IOC) to take the Feb. 4-20 Olympics out of China given its treatment of Uighur Muslims along with other human rights concerns. China denies human rights abuses.

The USOPC said it is capitalising on every chance it can to educate athletes, whether at training, via virtual town hall meetings or in person at Olympic trials.

Educating athletes is not new ground for the USOPC as the organisation also primed athletes on topical issues ahead of this year’s Tokyo Olympics, which were held after a year in which social justice protests swept the globe.

“We are trying to provide information for athletes across a variety of topics and choices,” USOPC Chief Executive Officer Sarah Hirshland said. “We did the same in advance of Tokyo as it related to issues of racial and social justice.”

Hirshland said it was imperative to make sure athletes understand not only the platform they have but the potential risks of speaking out so they can make the best choice.

“The focus here is really on how do we make sure athletes have all the information they need,” said Hirshland. “That’s our plan going into these Games.”

Hirshland also said efforts will be made to ensure athletes understand the charters of the IOC and International Paralympic Committee (IPC).

“It’s important for our athletes to understand we are a guest at their Games and we are under, and agreed to abide by, the rules of those organisations,” said Hirshland.

“We are absolutely making sure athletes understand the rules and laws of the country that we are going to and where those risks might be because those laws and rules are different than they are in our country.”

(Reporting by Frank Pingue in Toronto; Editing by Ken Ferris) 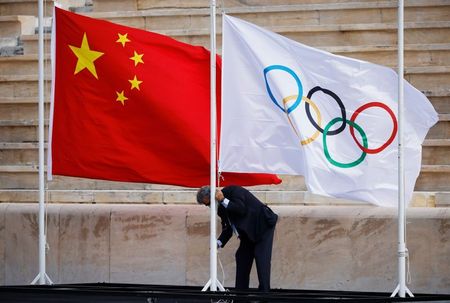