WARSAW – Almost 6,000 Polish soldiers are now guarding the country’s border with Belarus in stepped up security measures in the face of a surge in migration, the defence minister said on Tuesday.

The deployment of fresh troops marks a significant expansion of the military presence on the border as only on Saturday Defence Minister Mariusz Blaszczak had put the number of soldiers at more than 3,000.

“Almost 6,000 soldiers from the 16th, 18th and 12th divisions are serving on the Polish-Belarusian border,” Blaszczak said in a tweet.

“The soldiers provide support to the Border Guard by protecting the country’s border and not allowing it to be illegally crossed.”

The Border Guard said that on Monday there were 612 attempts to cross the border illegally.

The European Commission and Warsaw say the flow of migrants has been orchestrated by Belarus as a form of hybrid warfare designed to put pressure on the European Union over sanctions it imposed on Minsk. Belarus has denied this.

Poland has declared a state of emergency in the region and plans to build a wall on the border.

Parliament has also passed legislation that human rights advocates say aims to legalise pushbacks of migrants across its borders in breach of the country’s commitments under international law.

As of Sunday, there had been around 9,600 attempts to illegally cross the border in October, the Border Guard said.

An increasing number of migrants have also been arriving in Germany and Polish media reported that the head of the German Police trade union has asked the interior minister to temporarily restore border controls with Poland to stop the flow of migrants.

German Interior Minister Horst Seehofer offered to send border control officers to Poland to help the country manage the influx of migrants along the border between the two EU countries, adding that Germany could also offer logistical support in a letter to his Polish counterpart.

Authorities in Brandenburg, the eastern German state that is housing most of the new arrivals, are calling for tougher action against Belarusian President Alexander Lukashenko’s government. 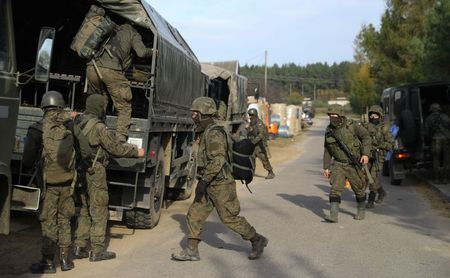