SEOUL – South Korea opened its largest defence expo ever on Tuesday, showing off its next-generation fighter jet, drones, and other technology in an effort to boost exports as economies around the world rebound from the COVID-19 pandemic.

Opening ceremonies for the International Aerospace and Defence Exhibition (ADEX) at an air base in Seoul were however somewhat overshadowed by the launch https://www.reuters.com/world/asia-pacific/nkorea-fires-unidentified-projectile-off-east-coast-skorea-military-2021-10-19 of what South Korea said was a North Korean submarine-fired ballistic missile (SLBM).

“Despite the COVID-19 situation this year, export marketing is expected with products developed by domestic companies at the exhibition hall, which has been expanded from last year,” ADEX official Lee Jong-ho told reporters on Monday.

At least 440 companies from 28 countries are showcasing 79 types of aircraft and 68 types of ground equipment. Around 300 government, military and defence acquisition officials from 45 countries were expected to attend the event, which lasts through Saturday.

At least 170 U.S. troops were on hand to display American military aircraft, the U.S. Air Force said in a statement.

Last week Korea Aerospace Industries officials declined to comment on potential export deals for its KF-21 fighter jet and Light Attack Helicopters, but said both programmes were on track. https://www.reuters.com/business/aerospace-defense/korea-aerospace-says-fighter-jet-helicopter-prototypes-track-ahead-expo-2021-10-15

Korean Air said it was displaying drones with vertical lift-off and landing capabilities, while a “space hub” at the show displays components of South Korea’s space programme, expected to get a boost with the planned launch https://www.reuters.com/world/asia-pacific/spy-satellites-mobile-networks-skorea-hopes-new-rocket-gets-space-programme-off-2021-10-15 of its first space launch vehicle on Thursday.

North Korea, which has complained that South Korea’s arms buildup threatens to destabilise the peninsula, put on a defence display https://www.reuters.com/world/asia-pacific/nkorea-threatens-upstage-skorea-defence-expo-with-duelling-military-show-2021-10-14 last week.

South Korea’s arms exports in 2016–20 were 210% higher than in 2011–15, according to Stockholm International Peace Research Institute data. 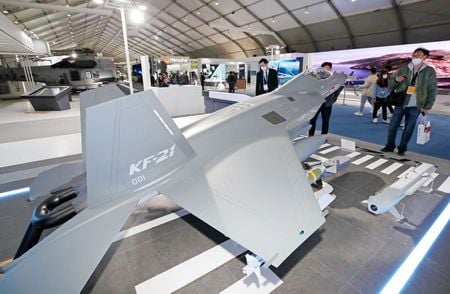