By Jason Lange and Richard Cowan

WASHINGTON -A top Democrat in the U.S. House of Representatives on Tuesday said he would support allowing the U.S. Treasury secretary to unilaterally extend the limit on federal borrowing, with Congress then empowered to vote on vetoing such decisions.

“It’s a good option,” House Majority Leader Steny Hoyer told reporters in a weekly press conference. He said the Treasury secretary should be allowed “to make a judgment.”

Hoyer’s remarks come as Congress faces an early December deadline for either raising the borrowing limit or pushing the federal government into an unprecedented default on its debt.

The task has been complicated by Republicans, who say they do not want to see a default but at the same time have voted against a debt limit increase, hoping Democrats figure out a way of passing such legislation on their own in the deeply divided Congress.

Legislation to alter the way Washington increases its borrowing authority, which now has a $28.9 trillion limit, likely would face opposition in the Senate, where 60 out of the chamber’s 100 votes are needed to advance most legislation.

Democrats have been opposed to using a “budget reconciliation” tool to approve a debt limit increase without any Republican input, saying the complex procedure is both too time consuming and would set a bad precedent.

On a related matter, Hoyer said the House was still aiming to pass by the end of this month a $1 trillion bipartisan infrastructure investment bill along with a Democrats-only multi-billion-dollar measure expanding social programs and tackling climate change.

“We are committed to meeting the deadline of Oct. 31. We’re working very hard to have both of those bills ready to be passed by the House of Representatives before that date,” Hoyer said.

However, the House has failed to meet a previously set end-of-September deadline for these bills, as moderates and progressives in the Democratic Party fight over the size and scope of the larger bill.

Republicans have attacked the large spending initiatives being sought by Democrats and have argued that is the reason they will not vote for a debt limit increase, even though it mainly finances spending they voted for during the Trump administration. 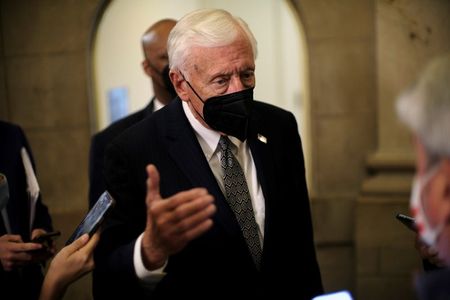