STOCKHOLM – Spotify is planning to hire hundreds of staff to boost its advertising sales in Europe and elsewhere, as the music streaming service looks to increase revenue from customers who don’t pay a monthly fee but make up the bulk of its user base.

“We are increasing our ads business marketing workforce by over 70% in Europe, Australia and Canada … and that’s off a pretty sizable base,” Lee Brown, Spotify’s head of advertising business, said in an interview.

“We’re investing in our advertising business. As far as long-term strategy, I think gone are the days of advertising being less than 10% of our overall revenue.”

Spotify has also hired an ad industry executive with 25 years of international experience to lead international sales, Brown said, though he did not give a name.

The company, which earns income from paid subscriptions and by disseminating ads to non-paying users, saw its advertising business return to growth this year after being hit by the pandemic.

Of its 365 million monthly active users, 210 million are ad-supported, bringing in about 12% of its total revenue.

“An ad not only creates revenue for the firm, but it also lowers costs, as it leads to fewer songs being played and, in turn, modestly lower royalties to be paid,” Morningstar analysts said.

A surge in podcast content – Spotify carried 2.9 million podcasts as of the second quarter, up nearly 12% from the previous three months – has helped boost ad revenue, as podcasts pull in more users and, being longer, allow more time for ads.

The company is looking to add more tools for advertisers, and will make its podcast advertising and publishing platform Megaphone available in Germany, France, Spain and Italy.

Megaphone, bought by Spotify last year, offers tools for podcasters to create ads for their own programmes, for which they receive income, and to measure their reach. It currently hosts about a third of the top 200 shows on Spotify and Apple.

Spotify has been spending hundreds of millions to beef up its podcast business. Its competition with Apple has intensified after both launched paid subscription platforms for podcasters earlier this year.

The Swedish company is expected https://www.emarketer.com/content/spotify-pandora-lead-us-audio-listeners to overtake Apple in podcast listeners for the first time this year, according to research firm eMarketer. 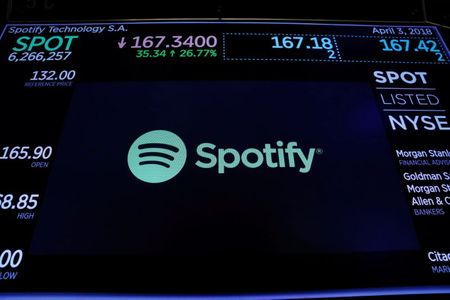