-Indonesia, Malaysia, the Philippines and Singapore pushed for a harder stance against Myanmar junta leader Min Aung Hlaing at a “tense” meeting that decided to exclude him from a regional summit this month, four people with knowledge of the talks said.

Southeast Asian ministers were divided between sticking to a tradition of non-interference and the need to retain credibility by sanctioning the coup leader, who has led a bloody crackdown on dissent since seizing power from Myanmar’s civilian government on Feb. 1, the sources said.

In the end it was the chair Brunei, with majority backing, that chose to keep him from attending the virtual Association of Southeast Asian Nations (ASEAN) leaders’ summit set for Oct. 26 to 28, and invite instead a “non-political representative” from Myanmar.

The decision broke with ASEAN’s decades-long policy of engagement and non-interference in the affairs of member nations.

“The mood in the meeting had never been more tense,” said one of the people with knowledge of the discussions.

“If you asked me if ASEAN would do something like this a year ago, I would have said it would never happen,” said a regional diplomat. “ASEAN is changing.”

Singapore Foreign Minister Vivian Balakrishnan said on Twitter the outcome of Friday’s meeting was a “difficult but necessary decision to uphold ASEAN’s credibility”.

Philippines Foreign Minister Teodoro Locsin said before the meeting that the bloc could no longer afford to take a neutral stance on Myanmar, adding that if it relented, “our credibility as a real regional organisation disappears … We’re a bunch of guys who always agree with each other on the worthless things”.

International pressure has been mounting on ASEAN for a harder line against Myanmar’s failure to take agreed steps to end violence, allow humanitarian access and start dialogue with its opponents, in line with an ASEAN “consensus” reached in April.

The grouping’s perceived ineptitude has sparked outrage in Myanmar, with some anti-junta protesters burning the bloc’s flag.

Since overthrowing Aung San Suu Kyi’s government, detaining her and most of her allies and ending a decade of tentative democracy, Myanmar’s military has killed more than 1,000 people and arrested thousands in a bid to crush resistance, monitoring group the Assistance Association for Political Prisoners says.

In a televised address on Monday, making his first remarks since the snub, Min Aung Hlaing defended the military’s actions, saying it was seeking to restore order and ASEAN should take note of violence out by its opponents, before announcing an amnesty for thousands of political prisoners. [L1N2RE08M]

Earlier, a spokesman blamed ASEAN’s decision on “foreign intervention”, saying the United States and representatives of the European Union had pressured other members of the grouping.

For decades, Myanmar’s military has been a thorny issue for the regional bloc, as previous ruling juntas came under fire for brutally crushing pro-democracy movements.

Friday’s decision came after weeks of failed diplomacy and days after plans were scrapped for a visit to Myanmar by ASEAN’s special envoy Erywan Yusof when the junta denied him a meeting with Aung San Suu Kyi, citing the criminal charges she faces.

Indonesia, Malaysia and Singapore first floated the idea of sidelining the junta head at a meeting this month of ASEAN foreign ministers, said the regional diplomat, as a tactic to win access to Suu Kyi, who is being held at an unknown location.

In an interview with Reuters on Tuesday, Indonesian President Joko Widodo said the envoy being prevented from meeting Suu Kyi meant Myanmar’s junta was not honouring its commitment to ASEAN.

“How do you meet the consensus that way?” he asked. “What ASEAN wants is to solve the problem.”

Jokowi, as the president is known, said ASEAN’s decision not to invite the junta to the summit had his backing, and Indonesia was behind the idea from beginning.

“Very much,” he said, when asked if he agreed with it. “We’re the one who suggested that.”

Two of the sources who spoke to Reuters said there were fears that Min Aung Hlaing’s presence would deter other global leaders from attending the larger East Asia Summit, set for a few days after the ASEAN summit.

“The threats to disengage weren’t made, at least explicitly, but there was anxiety on the part of member states that it would begin to affect ASEAN’s credibility in a broader sense,” said Aaron Connelly, a Southeast Asia researcher at the International Institute for Strategic Studies.

The regional leaders discussed on Friday requests to attend the summit from Myanmar’s parallel civilian government, the National Unity Government, which two sources said has been in quiet talks with Indonesia, among other nations, but stopped short.

The selection of a “non-political representative” now falls to the junta, which is likely to choose someone seen as comparatively neutral but tied to the regime, three of the sources said.

But the decision to sideline Min Aung Hlaing represents “the most severe sanction that any ASEAN member state has ever been dealt by the organisation,” said Connelly.

People regionwide have “lost faith and hope in the mechanism of ASEAN to protect its own community members,” said Fuadi Pitsuwan, a fellow at Chiang Mai University’s School of Public Policy.

It might be time to “re-evaluate” the non-interference principle, he added.

“Let’s see if this would kick start another round of this existential deliberation and whether it would end differently.” 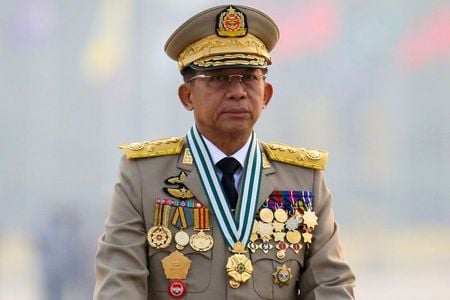