NEW YORK -The first U.S. bitcoin futures-based exchange-traded fund began trading on Tuesday, sending bitcoin to a six-month high and just off its all-time peak, as traders bet the ETF could boost investment flows into cryptocurrencies.

The ProShares Bitcoin Strategy ETF closed up 2.59% at $41.94 in its first day of trading, with around $1 billion worth of shares trading hands on Intercontinental Exchange Inc’s NYSE Arca exchange under the ticker BITO.

The greenlighting of the ETF by the U.S. Securities and Exchange Commission was seen as a watershed moment for cryptocurrencies and helped push the price of bitcoin as high as $64,367.14, its highest level since mid-April and near its record of $64,895.22.

Bitcoin, the world’s largest cryptocurrency, is notoriously volatile, and has risen around 45% this month on hopes that the advent of U.S. bitcoin ETFs – several of which are in the works – will spur billions of dollars managed by pension funds and other large investors to flow into the sector.

“I think what we saw today was retail, HFT algo trading trying to find the arbitrage, and a whole lot of institutions sitting on the sidelines and watching,” he said.

Similar products were set to come to market, with Nasdaq Inc having approved the listing of the Valkyrie Bitcoin Strategy ETF on Friday, while Grayscale, the world’s largest digital currency manager, said it plans to convert its Grayscale Bitcoin Trust into a spot bitcoin ETF.

Crypto ETFs have launched this year in Canada and Europe amid surging interest in digital assets. VanEck and Valkyrie are among fund managers pursuing U.S.-listed ETF products, although Invesco on Monday dropped its plans for a futures-based ETF.

The SEC has yet to approve a spot bitcoin ETF.

Bitcoin futures have been overseen by the Commodity Futures Trading Commission for four years and ETFs are regulated by the SEC, offering some level of investor protection, the SEC’s chair, Gary Gensler, said on Tuesday.

“Yet it’s still a highly speculative asset class and investors should understand that underneath, there is the same volatility and speculation,” he told CNBC. 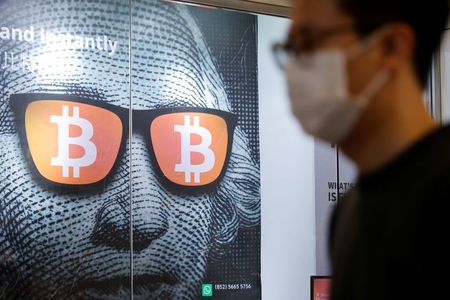