WASHINGTON – U.S. homebuilding unexpectedly fell in September and permits dropped to a one-year low amid acute shortages of raw materials and labor, supporting expectations that economic growth slowed sharply in the third quarter.

The report from the Commerce Department on Tuesday also showed the gap between completed houses and those still under construction was the largest on record last month. Robust demand as global economies emerge from the COVID-19 pandemic is running against worker shortages, straining supply chains and fanning inflation. Nearly every industry in the United States is experiencing shortages.

“Momentum in demand still appears to be positive,” said Rubeela Farooqi, chief U.S. economist at High Frequency Economics in White Plains, New York. “But supply is struggling to catch up given higher input costs and shortages that remain headwinds for builders.”

Economists polled by Reuters had forecast starts would rise to a rate of 1.620 million units. Lumber prices are rising again after tumbling from record highs set in May. Building materials, like windows and electric breaker boxes, are in short supply.

Prices for copper, another essential material in home building, have soared more than 16% since the end of September, buoyed by decades-low supplies. The pandemic has upended labor market dynamics, leading to shortages of workers needed to produce and move raw materials and finished goods to markets.

Starts have declined from the 1.725 million unit-pace level scaled in March, which was more than a 14-1/2-year high.

Single-family starts, which account for the largest share of the housing market, were unchanged at a rate of 1.080 million units last month. Single-family homebuilding rose in the West and Midwest, but fell in the Northeast and the densely populated South, also likely depressed by Hurricane Ida, which caused unprecedented flooding. Starts for buildings with five units or more dropped 5.1% to a rate of 467,000 units last month.

A survey from the National Association of Home Builders on Monday showed confidence among single-family homebuilders rising further in October, but noted that “builders continue to grapple with ongoing supply chain disruptions and labor shortages that are delaying completion times.”

Stocks on Wall Street were trading higher as upbeat results from Johnson & Johnson and Travelers fired up risk appetite. The dollar fell against a basket of currencies. U.S. Treasury prices were mixed.

Last month’s decline in homebuilding followed on the heels of news on Monday that production at U.S. factories fell by the most in seven months in September. Residential investment likely remained weak in the third quarter after contracting in the April-June quarter.

Gross domestic product growth estimates for the third quarter are mostly below a 3% annualized rate. The economy grew at a 6.7% pace in the second quarter.

The housing market was boosted early in the coronavirus pandemic by an exodus from cities to suburbs and other low-density locations as Americans sought more spacious accommodations for home offices and online schooling, leading to three straight quarters of double-digit growth in residential spending. That tailwind is ebbing as workers return to offices and schools reopened for in-person learning, thanks to COVID-19 vaccinations. High inflation is also lifting mortgage rates.

The 30-year fixed mortgage rate rose to an average of 3.05% last week from 2.99% in the prior week, according to data from mortgage giant Freddie Mac. Though still low by historical standards, rising borrowing costs could make homeownership less affordable for some first-time buyers. House prices notched record double-digit growth on an annual basis in July.

A separate report from the Mortgage Bankers Association on Tuesday showed mortgage applications for new home purchases decreased 16.2% in September from a year ago. Applications were down 4% on a month-on-month basis. The average loan size hit a record $408,522, underscoring the higher construction costs.

Housing completions dropped 4.6% to a rate of 1.240 million units, the lowest level since August 2020. Single-family home completions were unchanged at a rate of 953,000 units.

The stock of housing under construction increased 1.3% to a rate of 1,426 million units last month, the highest since February 1974. That led to a record wide gap between completed homes and houses under construction.

Also highlighting the supply constraints, the number of houses authorized for construction but not yet started raced to a record high last month. 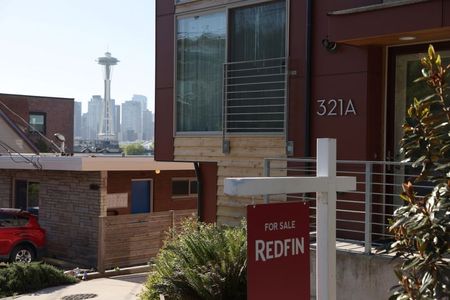