BEAUMONT, Texas – The U.S. National Labor Relations Board is expected to schedule a mid-November vote on removing the United Steelworkers union from Exxon Mobil’s Beaumont, Texas, refinery, a person familiar with the matter said on Tuesday.

Exxon locked out union members on May 1 after it and the USW were unable to agree on a new, six-year labor contract for the refinery and oil-blending and packaging plant. A vote on Exxon’s proposed contract is ongoing and results are due this evening.

At least 30% of the plant’s 650 members separately signed a petition calling for an NLRB vote to decertify the local union. Decertification is the formal name for the removal process.

An Exxon spokesperson was not immediately available to comment on the vote timing. The NLRB did not reply to a request for comment.

The NLRB will first consider the union’s charge that Exxon improperly aided the removal petition before releasing any results from the vote, the person familiar with the matter said.

The USW in April filed a complaint with the NLRB alleging Exxon had violated federal law by providing an employee with decertification materials, employee email addresses and use of a company computer and email system to campaign for decertification. 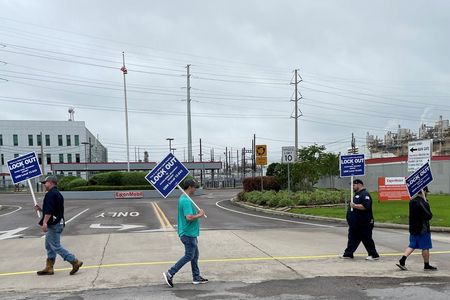