WASHINGTON -The Washington regional subway system said on Monday that sharp cutbacks in service will last through at least Sunday as the system grapples with a safety issue flagged after a derailment of a train outside the U.S. capital last week.

The U.S. National Transportation Safety Board (NTSB) said on Monday it may issue an “urgent recommendation” telling transit agencies to inspect Kawasaki train cars to make sure they do not have an issue with wheel assemblies like the one identified in a derailment in Arlington, Virginia, last Tuesday.

The Washington Metropolitan Area Transit Authority (WMATA), the nation’s second-busiest system, was ordered by safety officials on Sunday not to use nearly 60% of its rail fleet on Monday.

The Washington Metrorail Safety Commission (WMSC) said it had ordered the 7000-series trains removed from service on Monday after the NTSB “identified safety concerns related to the spacing of wheels on 7000 Series railcar axles.”

“We may at some point issue an urgent recommendation,” NTSB Chair Jennifer Homendy told reporters on Monday. “If you are a transit agency operating in the United States and you’re listening, make sure you are checking your cars as well.”

The Washington subway system carried an average 625,000 passengers daily before COVID-19. WMATA said in August that subway ridership was at 26% of pre-pandemic levels on weekdays and near 50% on weekends. https://wmata.com/initiatives/ridership-portal/upload/August-2021-Ridership-Snapshot.pdf

WMATA said on Monday that the Red Line, which services Washington and the Maryland suburbs, will run every 15 minutes, while all other trains will run every 30 minutes and urged travelers to consider alternative transportation.

Homendy said WMATA had been aware of wheel assembly issues since 2017. She said preliminary data showed that since 2017, there had been 31 WMATA wheel assembly failures – including 18 this year – and 21 failures were uncovered during inspections that began on Friday and are ongoing.

The derailment did not injure any of the 187 passengers onboard, but Homendy said the incident could have been “catastrophic.”

WMATA said it would not return its 748 7000-series railcars “until they are deemed safe.” 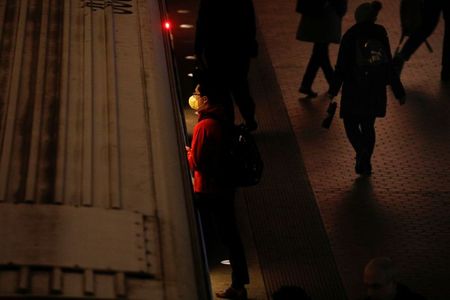