WASHINGTON -The White House on Tuesday said it has not ruled out a carbon tax as a possible option for fighting climate change, even though U.S. Senator Joe Manchin, a critical holdout in the closely divided Senate, said he was not discussing the topic in talks about U.S. spending and infrastructure bills.

“I’m not taking any options on or off the table,” White House spokesperson Jen Psaki told a briefing when asked about a carbon tax.

Psaki said President Joe Biden believed it was possible to design a carbon tax that would not violate his pledge not to raise taxes on people making $400,000 or less a year.

Some Democrats, including Senator Ron Wyden, have focused on a carbon tax as a possible alternative as Manchin opposes a key measure in the spending bill called the Clean Energy Payment Program (CEPP.)

That measure, which would reward power utilities for investing in renewable energy such as wind and solar and fine those who do not, has been backed by Biden to achieve his climate goals including cutting U.S. emissions by about 50% by 2030 compared to 2005 levels but is effectively dead, Congressional sources say.

Manchin indicated a carbon tax was not in play.

“The carbon tax is not on the board at all,” he told reporters. Manchin, a fellow Democrat, is a centrist from West Virginia, the top U.S. coal producing state after Wyoming.

Representative Pramila Jayapal, the chair of the Progressive Caucus, told reporters that a carbon tax did not come up in a meeting she and other Democrats held with Biden at the White House on Tuesday.

Under a carbon tax, the government sets a gradually rising price for each ton of greenhouse gas that polluters emit, incentivizing industries to move to cleaner energy sources.

One source familiar with discussions in Congress around a carbon tax said the Senate finance committee is weighing a fee in the range of $15-$18 per tonne of CO2 that would steadily rise over the years. Much of the revenue would be returned to consumers as cash payments.

With the U.N. climate summit in Glasgow due to begin in less than two weeks, the White House has been making the case that it can reach Biden’s climate goals even if the legislation does not have everything Biden wanted, including the CEPP.

Psaki cited a report from Rhodium Group, an independent research organization, to underscore White House confidence that Biden’s goals can be met.

Biden moved to re-enter the Paris climate agreement on his first day in office, but he had relied on Congress to deliver legislation to deliver a bulk of the emissions reductions he pledged by the end of the decade.

The back-and-forth among his fellow Democrats in Congress over his bills has threatened to undermine his efforts to reassure the world that he can deliver the U.S. national pledge to slash emissions up to 52% below 2005 levels by 2030.

If Congress is forced to drop certain climate measures, the legislation would still take huge steps on global warming with incentives for electric vehicles and expanded tax credits for renewable power such as wind and solar, according to John Larsen, an author of the report.

“I’m much more worried about no deal than trimmed down bills,” he said.

Manchin urged lawmakers to pass the $1 trillion bipartisan infrastructure bill before the wider spending bill and in time for the U.N. climate talks that start at the end of the month.

Progressive Democrats have said the bills should be passed together to ensure that the debate on wider legislation on climate and social programs does not slip into next year, or get abandoned altogether.

“We have the trust in each other, we should be able to vote immediately on the bipartisan infrastructure bill, which is a tremendous piece of legislation for the president to take with him to Glasgow,” Manchin told reporters. 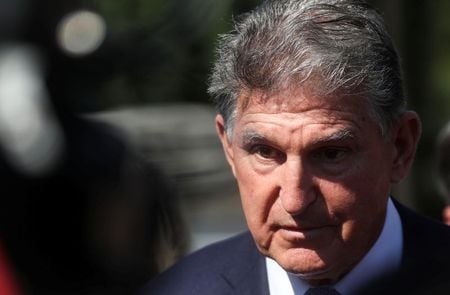