By Maria Caspani and Brendan O’Brien

NEW YORK -New York Mayor Bill de Blasio on Wednesday ordered all city employees to show proof of inoculation against COVID-19 or be placed on unpaid leave, drawing criticism from a police union which vowed to fight the mandate in court.

The mayor set a deadline of 5 p.m. on Friday, Oct. 29, for employees to show proof to a supervisor. Seventy-one percent of all 160,000 New York City workers have already received at least one dose, the mayor said.

The rate among the police department, where the virus has killed more than 460 officers, was also about 71% as of Wednesday, NYPD spokesperson Sergeant Edward Riley told Reuters in an email, up from about 47% in August.

“There is no greater privilege than serving the people of New York City, and that privilege comes with a responsibility to keep yourself and your community safe,” de Blasio, mayor of the most populous U.S. city, said in a statement.

But Patrick Lynch, president of the Police Benevolent Association representing the city’s 50,000 active and retired officers, issued a statement saying they should have the opportunity to choose whether to get the vaccine.

“From the beginning of the de Blasio administration‘s haphazard vaccine rollout, we have fought to make the vaccine available to every member who chooses it, while also protecting their right to make that personal medical decision in consultation with their own doctor.

“Now that the city has moved to unilaterally impose a mandate, we will proceed with legal action to protect our members’ rights,” he said in a statement.

De Blasio cited overtime and redeployments as contingency plans should a large contingent of those officers and other unvaccinated city workers refuse to comply with the mandate.

“We have a variety of ways we can adjust the use of the workforce,” he told reporters. “We feel confident that even if there’s some temporary dynamic of some people not being ready right away, that we’re going to find our way through it.”

Municipalities, school districts and other jurisdictions throughout the country are grappling with masking and vaccination requirements. The number of new COVID-19 cases has steadily declined in the United States since a surge caused by the Delta variant of the virus during the summer.

De Blasio said employees will no longer have the option to be regularly tested instead of getting the vaccine, but added that the city will still grant medical and religious exemptions.

Mandates in New York City and state have faced many legal challenges. In most cases, courts have backed the authority of governments to mandate inoculations.

Workers at the city’s Department of Education and New York City Health and Hospitals agency have been subject to vaccination mandates since September. The vaccine rate in those departments is at least 95%, de Blasio said.

Civilian employees of the city’s Department of Correction (DOC) and uniformed members of the DOC assigned to hospitals and other healthcare settings are also immediately subject to the mandate.

But for other uniformed correction officers, the deadline for vaccination is Dec. 1, as the city works to address severe staffing shortages at the Rikers Island jail complex, de Blasio said.

As a sweetener, city employees will receive a $500 bonus for receiving their first shot at a city-run vaccination site by the Oct 29 deadline, de Blasio said.

(Reporting by Akriti Sharma in Bengaluru, Brendan O’Brien in Chicago and Maria Caspani in New York; Editing by Howard Goller) 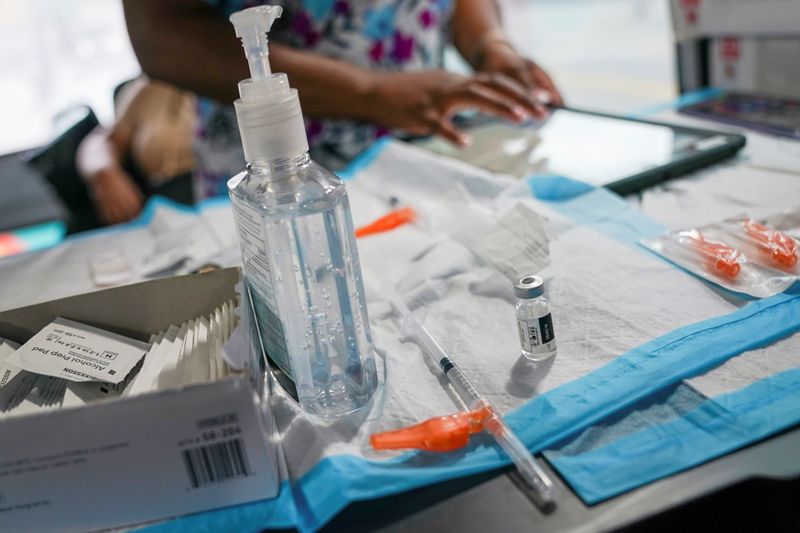