Both Pohang and Al Hilal will be looking to win Asia’s premier club competition for a record fourth time when they meet in Riyadh on Nov. 23, with Leonardo Jardim’s side booking their place on Tuesday with a 2-1 win over fellow Saudis Al Nassr.

Pohang confirmed their place in their first final since 2009 thanks to a late equaliser from Australian defender Alex Grant and a miss in the first round of the penalty shoot-out from Dutchman Davy Bulthuis.

Grant’s header cancelled out Yun Il-lok’s 52nd minute opener although the champions’ hopes were upended in the 68th minute when captain Won Du-jae was sent off for a two-footed lunge on Lim Sang-hyub.

At that point Ulsan were in control, even though Pohang’s Lee Seung-mo had hit the post with an early header.

Oh Se-hun put his shot on the turn wide of the target at the other end in a first half played at a slow tempo and often lacking in quality.

That was to change after the interval with Ulsan taking the lead seven minutes into the second half.

Seol Young-woo scampered down the left before centring to Yoon Bit-garam, whose pass was fumbled by goalkeeper Lee Jun into the path of Yun and the former Montpellier forward calmly slotted in.


Ulsan could have added a second nine minutes later only for Yoon to hit the post while Lee Seung-mo threatened without success on several occasions for Pohang.

Won’s sending off as the game entered the final quarter was to prove costly for Ulsan when, in the 89th minute, Grant levelled with a looping header that went in off the inside of Jo Hyeon-woo’s post.

Neither side was able to find a way through in the 30 minutes of extra time, taking the game to a shoot-out where Bulthuis fired high over the bar with his team’s opening spot-kick.

Successful conversions from Lim, Kwon Wan-kyu, Kim Sung-ju and Jeon Min-gwang left captain Kang Sang-woo to slot in the winning penalty as Pohang won and look to add this year’s Asian title to those won by the club in 1997, 1998 and 2009. 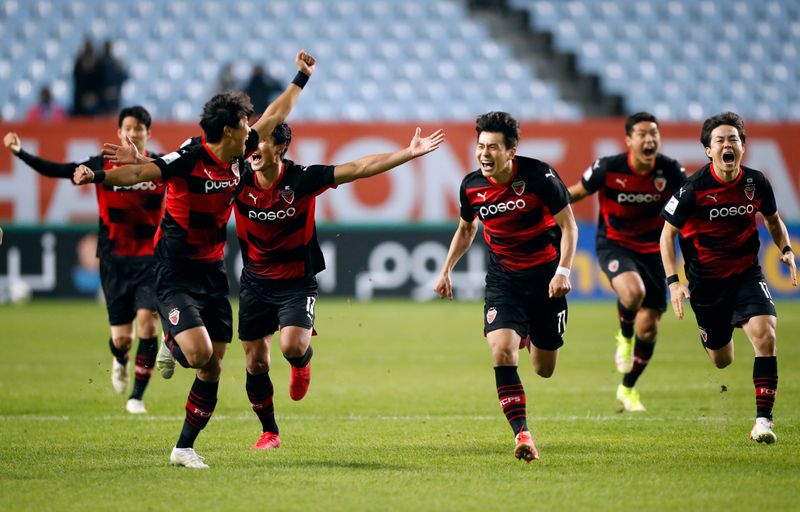