WASHINGTON -A bill aimed at thwarting restrictive new voting laws enacted in Republican-led states failed to advance in the U.S. Senate on Wednesday, as Republican lawmakers blocked a Democratic effort to begin debating the measure.

It was the third time this year Senate Democrats tried to advance a voting rights bill in reaction to new state balloting restrictions that were fueled by Donald Trump’s false claims of a stolen 2020 presidential election.

Senate Majority Leader Chuck Schumer said it would not be the last time.

“The fight to protect our democracy is far from over,” he said.

While he did not lay out specific steps to possibly alter the Senate’s “filibuster https://www.reuters.com/world/us/what-is-us-senate-filibuster-why-is-everyone-talking-about-it-2021-10-06” rule that gives the minority party the power to block legislation, he hinted at doing so.

He complained that Wednesday’s vote was “not how the Senate is supposed to work,” adding: “Voting rights is not like other issues we deal with in this chamber. It’s about protecting the very soul of this nation.”

Some senators have been urging a carve-out to exempt the voting rights bill from the filibuster, which requires 60 of 100 senators to agree on most legislation.

All 50 Senate Republicans voted to block the measure, with party leaders saying it was an attempt to wrest control of voting rules from the states.

The bill would set broad federal standards for how states conduct elections, including ensuring all qualified voters can request mail-in ballots.

It also aims to expand voter turnout by making Election Day a federal holiday and would outlaw partisan drawing of congressional districts, known as “gerrymandering,” that both parties have engaged in for decades.

On Tuesday, Senator Angus King, an independent who aligns with Democrats, told reporters that if Republicans again blocked the bill, “we would either have to figure out a rule change or we have to try to have discussions toward a compromise solution.”

Democratic President Joe Biden, a former senator, has voiced objections to altering or abandoning the filibuster, although he suggested he was open to considering it during the recent showdown over hiking the debt ceiling.

There are several reform ideas percolating that could stop short of a ban on legislative filibusters. Those could include the exemption just for voting rights bills, limiting the number of filibusters against any one bill, or forcing those waging a filibuster to remain standing and speaking on the Senate floor until one side relents.

In the past, Manchin and Sinema have voiced objections to ending the filibuster, making it unclear whether Schumer would have the votes needed to alter the rule.

At least 19 states have enacted 30 laws restricting voting access this year, according to the Brennan Center for Justice at the New York University School of Law, following false claims by Trump, the Republican former president, that he lost the 2020 election to Biden because of widespread voting fraud.

Democrats and voting rights advocates denounce the measures as partisan power grabs that will make it harder for Black and Hispanic voters – important voting blocs for Democrats – to cast ballots.

“This latest umpteenth iteration is only a compromise in the sense that the left and the far left argued among themselves about exactly how much power to grab in which areas,” McConnell said in a Senate floor speech. 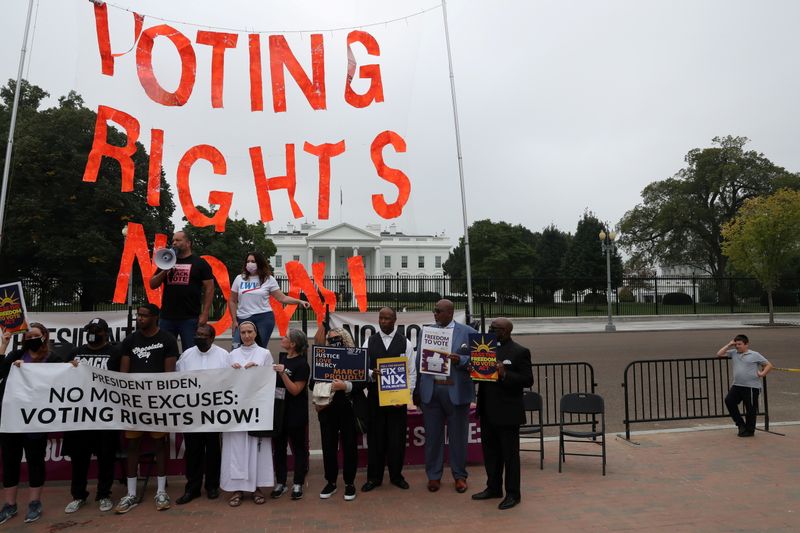