AUSTIN – In 2019, Diane Guerra and her husband moved out of their two-bedroom apartment in trendy East Austin to buy a house in one of the city’s booming northern suburbs. The move doubled their commutes – hers to 40 minutes, his to 30 – but they have no regrets.

“We simply couldn’t afford any of the larger houses in the city,” said Guerra, a 35-year-old executive assistant.

Like three in four Austinites, they commute solo. Traffic here has become increasingly gridlocked, pain that’s likely to intensify with the metro area’s population of 2.3 million people set to double over the next two decades.

To lure drivers out of their vehicles, Austin is pushing light rail and electric buses. Residents last year agreed to fund part of it with a property tax hike expected to raise more than $150 million annually, a figure that will increase as property values rise.

The Biden administration and Democrats in Washington, meanwhile, are proposing spending billions on public transit across the country to create construction jobs and fight global warming. The transportation sector is the single-largest contributor to U.S. greenhouse gas emissions.

But convincing Americans who live outside dense coastal cities to give up their cars won’t be easy, even in a place like Austin, which fancies itself a forward-thinking, progressive bastion in the middle of conservative Texas. In 2019, prior to the COVID-19 crisis, just 4% of residents used public transit to get to work, and ridership remains 40% below pre-pandemic levels, according to city data.

Some transport experts, however, are dubious of the ambitious plan, dubbed Project Connect.

Kara Kockelman, a transportation engineering professor at the University of Texas at Austin, said her research shows the new rail lines will handle just 1% to 2% of current trip demand, with ridership limited to people who live or work within a quarter of a mile of stations.

“Project Connect is a drop in the bucket,” Kockelman said.

Also unknown is how permanently the pandemic may have altered Americans’ living and working arrangements. Transit ridership has declined in cities nationwide as former strap-hangers lost jobs, worked from home or hopped into their cars to avoid crowded buses and subways. Others fled teeming cities and apartment blocks, rejecting the higher density prescribed by planners to fight urban sprawl.

In Austin, rush-hour traffic is still 13% below pre-pandemic levels, a change that, in part, reflects the enduring popularity of telecommuting, according to Rob Spillar, director of the city’s transportation department, which oversees roads, traffic management and related issues like parking.

Still, transit backers say Austin is at an inflection point. The 28th largest U.S. metro area, Austin ranked as the 18th-most congested U.S. city prior to the pandemic, according to transportation data provider INRIX. The portion of Interstate 35 that runs through the city routinely ranks among the nation’s worst bottlenecks.

“We need to talk about moving people versus moving cars,” he said.

Austin transit trips yet to recover from pandemic low https://graphics.reuters.com/USA-INFRASTRUCTURE/AUSTIN/zdpxordbwvx/chart.png

Austin provides a case study for the kind of spending required to update the nation’s transportation networks, buildings, energy systems and communications. Over the next decade, with broad support from the Greater Austin Chamber of Commerce, officials hope that about $20 billion in federal, state and city funds can be invested in infrastructure here, including $7.1 billion for Project Connect and nearly $5 billion to expand I-35.

By comparison, the bipartisan infrastructure bill currently stalled in Congress would commit $39 billion in new funding for transit projects nationwide. Democrats want to add a further $10 billion through a separate budget reconciliation bill.

Austin has a lot riding on the outcome. Half of Project Connect’s funding is supposed to come from the federal government. Even with that potential windfall, some critics lament what they see as a waste of taxpayer money.

Among the most vocal is Gerald Daugherty, a former Republican commissioner in Travis County, the overwhelmingly Democratic county in which Austin resides.

“You’re never going to have the density here that you have in the Northeast because we’ve never lived that way,” Daugherty said.

He favors solutions centered on pavement: road expansion, clean vehicles, carpooling and dedicated bus lanes. He believes such a system would provide more flexibility to get riders to employment centers blossoming around the county.

New area employers such as Tesla Inc underscore the challenges. The company’s planned vehicle and battery factory is under construction in a transit desert east of the city near the airport. Most of its promised 10,000 workers are expected to drive to work, according to Spillar, Austin’s transportation director.

Local officials appear cognizant that’s not a good look for the city or an electric vehicle maker intent on cutting carbon emissions. Spillar said Austin may look at transit options to ferry workers to the plant. Mayor Steve Adler said this month that Tesla CEO Elon Musk has expressed an “intent” to help build housing near the facility’s campus.

Tesla did not respond to a request for comment.

Clarke of Cap Metro contends drivers will embrace trains and buses once the system becomes more robust and reliable. Three new rail lines are expected to be completed over the next twelve years, connecting Austin’s south, north and east. Plans call for a tunnel downtown where passengers can catch all those trains. In addition, Austin intends to expand bus service significantly with new routes throughout the city.

Clarke previously was an executive at Boston’s transit agency, which provided some 1.2 million daily trips pre-pandemic – around 14 times the daily average seen in Austin in 2019.

“People in places like Austin don’t necessarily know the value of transit because proportionately so many fewer people use transit,” said Clarke, adding that those attitudes were slowly changing with more East Coasters moving to the Texas city.

He said residents who approved the property tax hike had understood that the city’s growth was not sustainable without public transit.

Convincing them to ride it is another matter.

Austin’s only existing commuter rail line, connecting the northern suburbs to downtown, has seen no lasting ridership increase even as growth in those suburbs has surged. Trains run just once every 30 minutes, and the trip takes 20 to 30 minutes longer than a comparable journey by car.

The city has been working to rewrite its land-use code for nearly a decade, arguing it would increase housing supply and lessen congestion. But just as in other U.S. cities, Austin has faced opposition from local residents and property owners, leaving the reform tied up in court.

New homeowner Guerra, meanwhile, is enjoying her family’s move to Cedar Park, about 16 miles northwest of Austin. She and her husband have a yard and no longer share walls with other apartment dwellers.

“It’s so nice to have our own space in a quiet neighborhood,” she said. 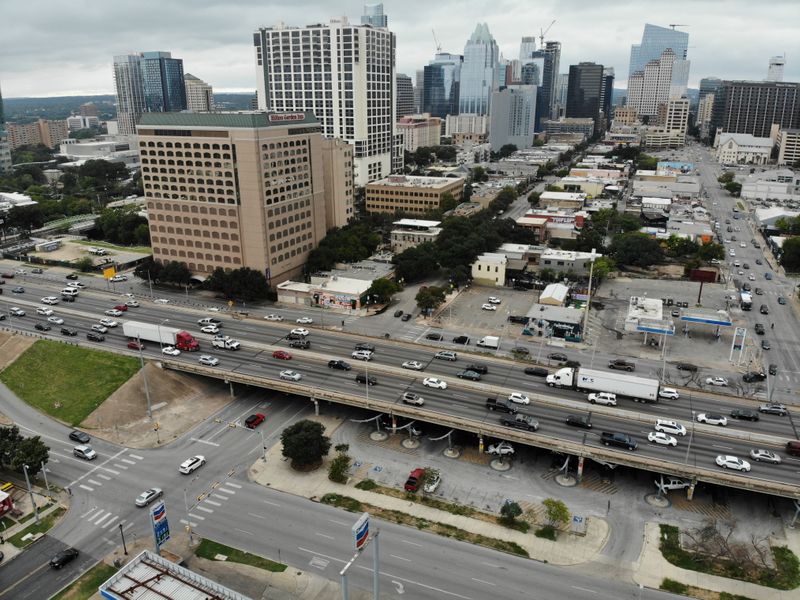