WASHINGTON – The Biden administration’s push to get progressive and moderate Democrats to agree to a deal on trillions of dollars in social spending faces a major stumbling block over plans to reduce child hunger and poverty in the United States.

Democrats remain at odds over how long to keep paying out the ‘child tax credit,’ a program that essentially gives lower and mid-income families thousands of dollars per child every year. They’re also split on whether it should be means-tested, and whether recipients should be forced to work.

WHAT IS THE CHILD TAX CREDIT?

In March, President Joe Biden’s American Rescue Plan expanded a per-child tax credit first created in 1997 by increasing payments to parents and making them available for the first time to 26 million children whose caregivers had too little earned income to file taxes.

The Internal Revenue Service started sending monthly cash payments to recipients in July, with the rest to follow when tax returns are filed. Non-filers must use a special IRS portal.

WHAT IMPACT HAS IT HAD?

The IRS last week said it had already delivered over $61 billion to families since July under the expanded child tax credit, aiding some 61 million children.

Studies show that money is being used mainly for food, clothes and school-related costs, and that it and other aid has cut childhood poverty by 56%, according to the Columbia University Center on Poverty and Social Policy.

Some say they plan to use the money to start or grow a college fund for their child, while others are using it for childcare costs.

WHAT IS THE DISAGREEMENT ABOUT?

The deal now under discussion would extend the expanded child tax credit passed in March by one year. But the Biden administration had sought a four-year extension, while child poverty experts and many experts and lawmakers wanted to make it permanent.

Extending it by one year rather than four would save some $300 billion from a $3.5 trillion spending plan that lawmakers are trying to trim.

WHAT IS MANCHIN’S WORK REQUIREMENT?

Manchin argues that failure to tie the tax credit to a work requirement could discourage low-income Americans from working. Researchers at the University of Chicago say 1.5 million parents could leave their jobs if the money flow is made permanent.

More than 400 economists from universities around the country disagree, telling congressional leaders in a letter last month that a universal child allowance – something already in place in 108 countries around the world – would have a “negligible” impact on employment.

Samuel Hammond at the Niskanen Center said Manchin’s work requirement would bar many families from the benefit – 8% of children under the age of 18 are raised by grandparents, many of whom are retired; 26% of people in college are parents who have little income; and 4% of households with children are headed by people with disabilities who may not be able to work outside the home.

WHAT IMPACT WOULD A LOWER CAP ON EARNINGS HAVE?

Manchin has also called for a $60,000 cap on the family income of those receiving the cash payments. Progressives say that would strip benefits from millions of families without much financial benefit.

The cap would lower the $400 billion cost of the initial four-year extension proposal by $30 billion, depending on the exact terms, according to the nonpartisan Tax Foundation. 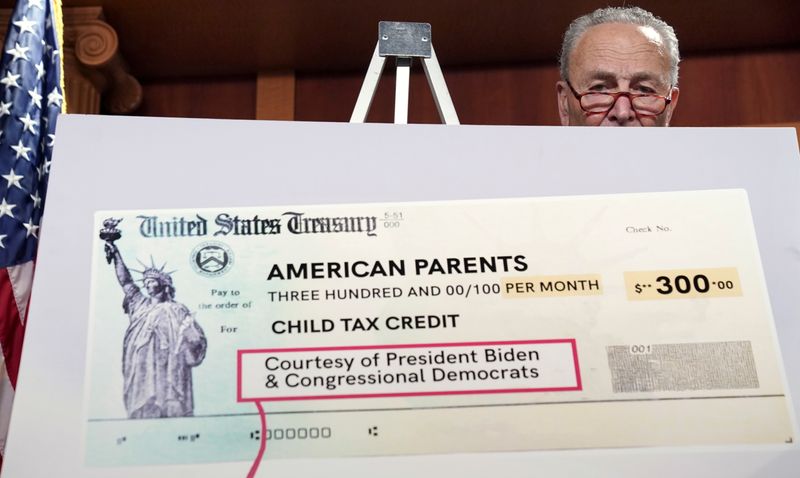