TOKYO – Japan’s Princess Mako, the emperor’s niece, will be married next week after years of criticism over her fiance that led to their marriage being postponed for three years and resulted in her being diagnosed with post-traumatic stress disorder (PTSD).

Mako, who turns 30 on Oct. 23, will lose her royal status after marrying commoner Kei Komuro, also 30. The two are set to live in the United States, where Komuro has a job with a law firm. [L4N2RH0JL]

The following is a brief outline of their relationship.

2012 – The two meet as students at Tokyo’s International Christian University, where Mako studied art and cultural heritage and earned a national certificate in curation.

September 2017 – The Imperial Household Agency announces their engagement. The two later hold a news conference during which their smiles at each other captivate the public, with their marriage set for November 2018.

December 2017 – Weekly magazines become the first to report a money dispute between Komuro’s mother and her former fiance, with the man claiming mother and son had failed to repay a debt of about $35,000. Komuro later said the money had been a gift, not a loan.

February 2018 – The marriage is postponed, with the official explanation that the couple needs more time to arrange their ceremony and prepare for married life.

August 2018 – Komuro leaves for the United States to study at Fordham University law school. He doesn’t return until September 2021.

November 2018 – Prince Akishino, Mako’s father, says it will be impossible to hold an engagement ceremony and other events until the financial dispute is resolved and the Japanese people can celebrate the marriage. He also tells a news conference that “I have not spoken much with my daughter recently, so I don’t know how she feels.”

November 2020 – Mako says in a statement that she and Komuro believe marriage is a “necessary choice” for them. Later that month, her father says he approves, but reiterates the financial dispute must be resolved.

April 2021 – Komuro issues a 24-page statement vowing to “correct erroneous information as much as possible” and says he will pay a settlement to his mother’s former fiance.

May 2021 – Komuro graduates from law school and starts working for a New York law firm.He takes the New York bar exam in July, with results due in December.

September 2021 – Komuro returns to Japan after an absence of three years, sporting a ponytail that sets off a frenzy in the tabloids, because it is deemed “disrespectful.” When he visits Mako’s parents several weeks later, in a dark suit, the ponytail is shorn.

October 1, 2021 – The Imperial Household Agency announces that the two will be married on Oct. 26. No ceremonies will be held and Mako will not accept a one-off payment made to women who marry out of the Imperial Family, usually around $1.3 million. It also says she has been diagnosed with PTSD due to the stress of the situation and excessive media reporting. 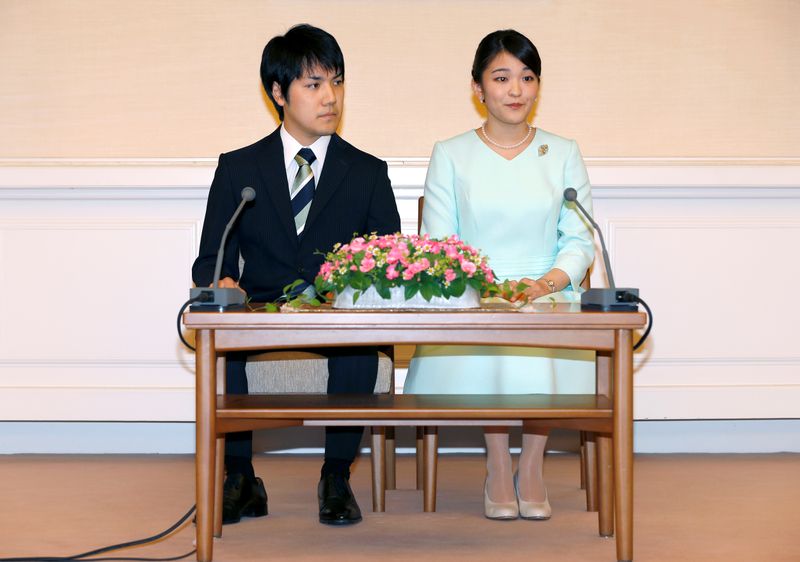